Stagecoach Bluebird has taken delivery of its 22nd BYD ADL Enviro400EV, the 1,000th bus manufactured by the partnership in six years

The partnership of Alexander Dennis (ADL) and BYD UK has jointly delivered its 1,000th zero-emission bus, an Enviro400EV double decker. The bus forms part of the fleet for Stagecoach Bluebird in Aberdeen, which was part-funded by the Scottish Government and handed over to the operator during Scottish Bus Week in the presence of the Scottish Government’s Minister for Just Transition, Employment and Fair Work.

Although it took five years to reach the 500th BYD ADL electric bus, the partnership has now delivered its 1,000th vehicle just one year later. Bus number 1,000 is the last of a fleet of 22 which Stagecoach has bought for services in Aberdeen with financial support from the Scottish Ultra-Low Emission Bus Scheme. Stagecoach has since confirmed an order for an additional 13 electric buses of the same type for Aberdeen following the award of funding through the Scottish Government’s follow-on scheme, the Zero-Emission Bus Challenge Fund.

“Alongside free travel for under-22s and over half a billion pounds in long term funding for bus priority infrastructure, we’re putting buses at the heart of Scotland’s just transition to net-zero by helping people choose to travel more sustainably. We can only achieve that transition by working together.”

Marie Connell, National Account Manager at ADL, added: “This milestone demonstrates the incredible pace at which the transition to zero-emission mobility is now happening thanks to bus companies’ drive for innovation and Government support. With 1,000 electric buses now on the road, our customers benefit from the BYD ADL partnership’s unrivalled experience. Stagecoach’s new order for another 13 of these electric double deckers will further extend the benefits as passengers will enjoy a smooth and quiet ride and the people of Aberdeen will breathe cleaner air.”

Peter Knight, Managing Director for Stagecoach Bluebird, commented: “We are all really excited to be sharing BYD ADL’s celebration of delivering its 1,000th fully electric bus. Introducing these new vehicles reflects the investment both we and Scottish Government are making thanks to the Scottish Ultra-Low Emission Bus Scheme and the funding made available to support the delivery of the new buses.

“There has never been a more important time to take action to address the climate emergency and play a part in helping Scotland deliver on its net zero ambitions whilst improving local air quality in Aberdeen. The introduction of these 22 new fully electric buses on our bus routes in Aberdeen reflect our commitment to creating a greener, smarter, safer and healthier country and at the same time will deliver major benefits for the region and our customers.”

Frank Thorpe, Managing Director at BYD UK, said: “BYD is delighted to be part of this successful partnership, which continues to go from strength to strength as the desire for zero-emission electric buses gains real momentum throughout the UK. This momentous handover to Stagecoach Aberdeen underlines how BYD ADL electric buses are becoming ‘the e-bus brand of choice’ for many operators, as a result of our combined specialist expertise and world-leading technology.” 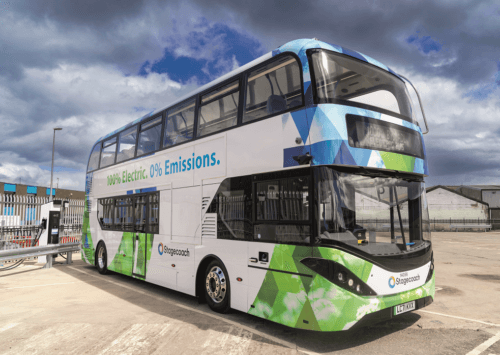