City Circle (UK) Managing Director Neil Pegg has taken delivery of his company’s 100th Scania Irizar coach at a special ceremony held at Scania Great Britain’s UK Customer Support Centre in Milton Keynes. The landmark vehicle formed part of a delivery of six coaches, the first of 20 being supplied by Scania to City Circle this year. All 20 vehicles will be Scania Irizar i6S models, of which 18 will be tri-axles with the remaining two based on 4×2 chassis.

The tri-axles will be fitted with Scania’s 410hp engine and fully automated Opticruise gear selection system. Their 13.2m bodywork will house 53 reclining seats with leather trim and extra padded flaps. The passenger seats will also benefit from seatback tables, magazine nets and footrests, and the body will be finished with extra-dark-tinted double glazing.

A sunken toilet/washroom and Frenzel kitchen are located at the centre continental exit. Additional features include reversing and road cameras, integrated satellite navigation and Alcoa Dura-Bright alloy wheels.
Meanwhile, the two-axle vehicles will use a 360hp engine and the same Opticruise gear selection system. Measuring 10.8m in length, they will be fitted with 36 reclining seats with half-leather trim and fully furnished seat back facilities for passenger comfort. 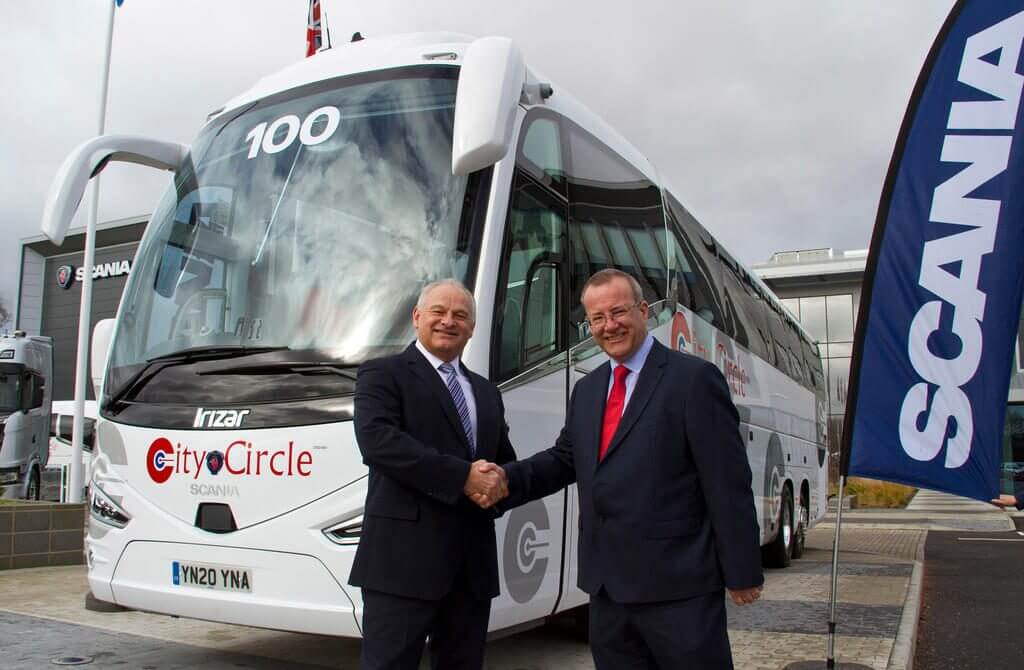 There will be a rear floor-mounted toilet/washroom and an extensive servery at the rear of the coach with built-in units for fridges and drinks facilities fitted by AD Coach Systems. Additional options include satellite navigation, twin monitors, dark-tinted glass and Alcoa Dura-Bright alloy wheels.

Neil Pegg commented: “It is the flexible approach taken by Scania and Irizar over the years which has led to this important milestone for each of our companies. The relationship began seven years ago when we were looking to replace some 10.8m vehicles in our fleet.

“The problem was nothing much was available in that length at the time, but Scania and Irizar were prepared to develop a bespoke solution for us, which they did in double-quick time – the order-to-delivery time was something like just five months, which included designing a custom-length coach to our specification.

“That can-do attitude impressed us and was the catalyst for everything which has followed. We had never operated Scania Irizar vehicles before, but we quickly began appreciating the quality and reliability of the product. So much so, that we have purchased Scania Irizar coaches every year since. Once this order is complete, 64 of our 69-strong fleet for 2020 will carry the Scania and Irizar badges.

“And while the vehicles have great passenger and driver appeal, I would also add that backup and support we receive from all areas within Scania is the best I’ve experienced in almost 40 years in the business.”
Scania’s Bus and Coach Sales Director, Martin West, added: “Our relationship with City Circle (UK) has developed and grown over the years, and we are naturally delighted to be associated with such a high-end, premium client.

“It’s true to say that all three parties involved have worked long and hard to formulate mutually-beneficial vehicle packages focused on the needs of City Circle (UK) and its customers, and on behalf of Scania I would like to thank Neil and his team and wish them every success going forward.”