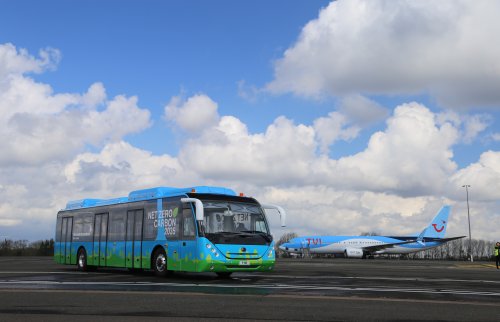 When we want to stick something, we turn to Sellotape. When it comes to cleaning, who hasn’t done some hoovering? And when we get to the airport, we board a ‘Cobus’ to take us to the plane. The Cobus brand has become synonymous with airside passenger transport in recent years, and indeed decades, as airports around the world have moved away from adapted off-the-shelf buses and adopted the now-standard format of a three metre wide, front engined, front wheel drive people mover to transfer large numbers of passengers quickly and efficiently between remote stands and the terminal building. But whilst the Cobus brand is probably the most well-known and widely used in Europe, it isn’t the only one in town.

On a slightly blustery Wednesday in late April, Yutong UK importer Pelican Bus & Coach invited members of the trade press to look at Yutong’s offering in the segment, seen now for the first time in the UK as this first example was delivered to Newcastle airport earlier in the year. Not only does this represent the first Yutong ABe13 in the UK, but as might be expected from a marque which is making waves in the electric bus market, this example is also fully electric, with 281kWh of batteries providing quiet, clean and green transport to help Newcastle International Airport achieve its climate goals.

Newcastle International Airport currently has a fleet which includes five Cobus and two Neoplan diesel-powered airside buses. The increasing awareness of the emissions from air travel has led airports to look closely at what they can do to reduce their own greenhouse gas emissions and improve their environmental footprint. Like many large bus operators, who have undertaken to introduce zero-emission fleets, Newcastle Airport has set itself a target of becoming a ‘net zero’ airport by 2035, a year in which it will celebrate its centenary, and in line with many other airports across Europe.