Borders Buses, part of the Craig of Campbelltown group, has launched Pingo Berwickshire, a new, on-demand service which allows customers to book a shared journey on a route not served by buses at that particular time. The launch follows the roll-out of Pingo at sister company West Coast Motors in April last year. Pingo Berwickshire operates within the Berwickshire area, where it will ‘join up journeys, integrating with the existing transport network, and providing bus travel where a service doesn’t exist.’

Booked via the Ride Pingo app, the service operates seven days per week from 0700 to 2100hrs. The service charges a £2 base fare plus 20p per mile, with fares automatically be calculated by the app when booking. For those paying on bus the fare is rounded up to the nearest 20p, and concessionary passes are accepted. Passengers without a smartphone can also book by telephone between 0900 and 1700hrs.

Operated by new, wheelchair-accessible, Mercedes-Benz Sprinter 16-seater minibuses, users will be able to take their bicycles thanks to racks which can hold two bikes fitted to each bus. A special launch offer saw all journeys charged at just £1 between 2 and 15 May. 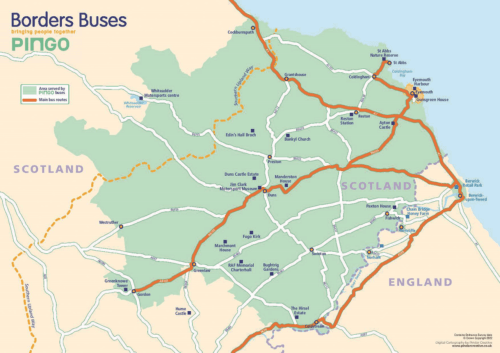