On Monday 15 March 2021, the Government released details of how its National Bus Strategy (NBS) would make buses ‘more frequent, cheaper, greener, easier to use’ and ‘see councils and operators working in partnership for the benefit of passengers’ under the much mooted title of ‘Bus Back Better.’

The Government heralded the announcement of the NBS as the ‘most ambitious shake-up of the bus sector in a generation,’ and it was to be backed by a £3 billion investment. Just 10 months later, it appears that funding for the transformational scheme has been cut by more than half to £1.4bn over three years.

The Observer reported last week that it had obtained a letter from the Department of Transport in regards to ‘Bus Back Better’ funding. The letter was dated 11 January and addressed to Local Transport Authority (LTA) directors. It reportedly states that funding has been cut to £1.4bn and “prioritisation is inevitable, given the scale of ambition across the country greatly exceeds the amount.”

Shadow buses minister Sam Tarry MP’s office put figures together that show that out of 79 local transport authorities, 53 have submitted bids that equate to more than £7bn, £4bn more than the original budget. The original £3bn investment was intended to ‘level up’ bus services by offering a number of nationwide improvements, including: simpler bus fares with daily price caps; more services in the evenings and at weekends; integrated services and ticketing across all modes; local authorities and operators working together to deliver bus services that are so frequent that passengers can just ‘turn up and go’ and no longer needing to rely on a traditional timetable, and; all buses to accept contactless payments.

With a funding cut, many of the LTAs will not be able to move forward with plans to make hugely transformational changes to buses, if their scheme has not been one of those chosen from the 53 submitted bids chosen to take advantage of the much reduced funding. Commenting on the situation, the Shadow Transport Minister said: “The Tories promised ‘transformational’ investment in bus services. But millions of passengers are seeing managed decline. They’ve dramatically downgraded the ambitions of local communities. With bus services being slashed nationwide, this is proof that this Government simply will not and cannot deliver for the people that need it most.”

Mayor of West Yorkshire Tracy Brabin added: “The decision by Government to cut the funding available for bus service improvement by over 50% is a major blow for our region. After losing out on long-promised rail investment with the scrapping of HS2 and paring-back of Northern Powerhouse Rail, we in the north of England were counting on this funding, so we could deliver the green, reliable and affordable bus network our people deserve.

“Sadly, money that would have been spent on transformation will now be spent on supporting ailing companies and subsidising existing services. Once again, local areas were promised levelling up, but are having to settle for managed decline. When you have operators struggling through Covid-19, a cost-of-living crisis and a climate emergency, now was the time to invest in our public transport. With the right ambition, I know that we can get people out of their cars and onto buses.

“Working with operators, I was able to make bus travel completely free for a day during COP26, raising awareness of climate change and driving up footfall by 13% even on a cold, wet Sunday. In London, people choose the bus by default every day because it’s the best, cheapest and quickest way to get around. I wanted that for West Yorkshire. But when even the Government acknowledges that your ambitions exceed the amount they’re willing to pay, you have to question their commitment to levelling-up.”

A Department for Transport spokesperson denied the funding cut and told The Observer: “It is incorrect to claim that funding has been cut from our original ambition. Over this parliament, the Government has committed to making a step change investment of over £3bn into bus services. This includes £1.2bn in dedicated new funding to deliver improvements in fares, services and infrastructure, and a further £355m of new funding for zero-emission buses.” 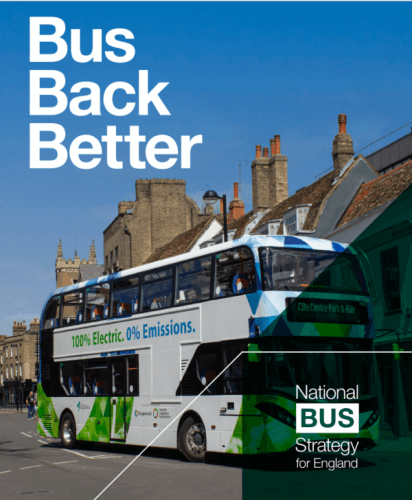