Ireland’s national operator Bus Éireann has thanked the people of Cork for their generosity in donating three full buses’ worth of aid to the people of Ukraine. A team of 30 volunteers facilitated the donation drive, with more than 10,000 items received, including baby, medical and sanitary items and valued at a total of €90,000. Corporate donations were also received locally from McDonalds, Dunnes Stores, Costa Coffee, Apache Pizza, SuperValu, Aldi and Irish Rail.

“We in Bus Éireann would like to thank the people of Cork for their generosity in donating over 10,000 items to the people fleeing the war in Ukraine, and taking time on a busy Saturday to drop the goods off,’’ said Aled Williams, Bus Éireann Senior Operations Manager South.
‘‘In total, three buses were filled and we received donations from people young and old across Cork city and county. We always have a fantastic response to our Fill a Bus campaigns for Cork Penny Dinners and it is wonderful to see that same commitment and compassion extending all the way across Europe.”

The donations were loaded into two articulated trucks which departed for the Polish/Ukrainian border via France and Germany on Tuesday 15 March. They were driven by two volunteer drivers, one of whom is a current Bus Éireann employee. The donation is being coordinated by the existing charity the Chernobyl Orphans Foundation. 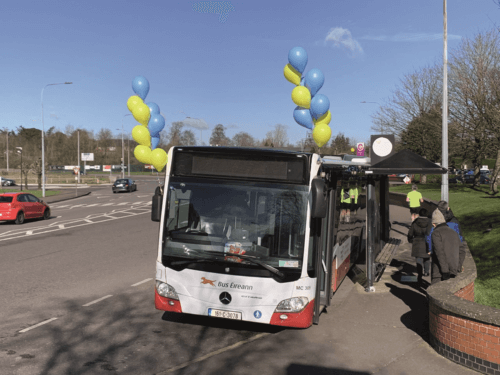