The Keighley Bus Company has dedicated a bus to honour the 99-year-old Yorkshireman whose NHS charity walk has raised over £28 million. 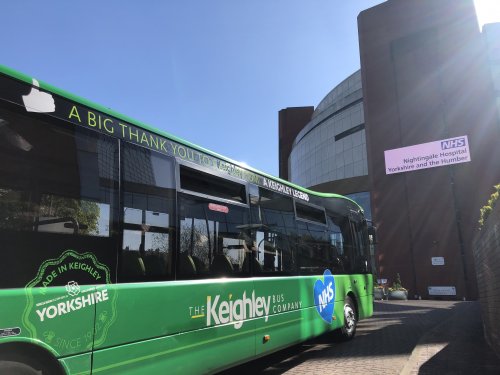 Tom became a sensation in a matter of days, raising millions for NHS Charities, by walking over one hundred lengths of his garden – and now the bus company in his home town in Yorkshire has dedicated a bus in his honour.

Captain Tom Moore has raised £28 million via his online appeal, and his charity single version of “You’ll Never Walk Alone” performed as a duet with Michael Ball and the NHS Voices of Care Choir has gone straight to the top of the iTunes download chart.

Captain Tom was born and raised in Keighley, West Yorkshire, and attended Keighley Grammar School before completing a civil engineering apprenticeship ahead of his military service in India and Burma in World War Two. Now, the modest 99-year-old war veteran’s proud Yorkshire roots are being celebrated in his home town by The Keighley Bus Company, which has named a bus in his honour and changed the livery to include the message: “A Big Thank You To Captain Tom – A Keighley Legend”.

Captain Tom’s bus made its first appearance at the opening ceremony of Harrogate’s new NHS Nightingale Hospital, as the pensioner turned national hero appeared via a live video link from his home to be the guest of honour. The hospital has been created in just two weeks in the town’s Convention Centre to provide 500 additional critical care beds for patients across the region.

CEO of The Keighley Bus Company Alex Hornby said: “Along with everyone else across the country, we are truly amazed by Captain Tom’s incredible fundraising efforts for NHS charities, and as he is a proud Yorkshireman raised in Keighley, we feel it’s entirely appropriate for us to express our thanks to him by naming our bus in his home town. 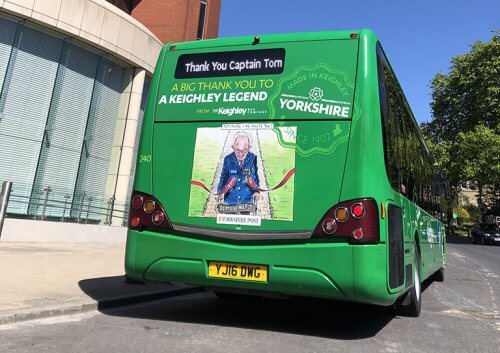 “All of our team in Keighley share our pride in serving the town where this inspirational man was raised, and he absolutely deserves all our thanks for everything he’s done – and continues to do – for our National Health Service.

“Inside our specially designed bus Captain Tom’s amazing story is displayed, while outside at the back, there’s a wonderful illustration of Captain Tom completing his fundraising walk, created by Yorkshire Post cartoonist Graeme Bandeira.

“Captain Tom’s bus will now be seen in his home county of Yorkshire on our local bus routes throughout the Keighley area, as we continue to provide vital transport links for key workers and those needing to access essential services throughout the Coronavirus pandemic. It’s our way of saying thank you to this remarkable man for raising so much money for our NHS, and just as importantly, lifting the spirits of our nation.”

More than 1.3 million people have donated to Captain Tom’s Just Giving page as he continues his fundraising efforts ahead of his 100th birthday on Thursday, 30 April 2020.