EVM’s progress in the growing electric vehicle (EV) sector has gained pace with 100% zero-emission drivelines now available on all of its buses, including the new Composite Mobility (CM) model. EVM says that recent SORT testing has shown that the vehicles’ range reaches ‘tantalisingly close’ to the 200 mile mark and the product now offers a solar energy recovery system to extend the range even further.

To put its range to the test, EVM decided to enter the very first London to Brighton EV Rally, which was originally scheduled for earlier in the summer but had to be postponed due to Covid-19 restrictions. Starting at the National Theatre on the banks of the Thames in London and finishing on Brighton beach, and sponsored by The Big Lemon and EDF among others, the event was open to a wide and varied range of entrants from home made electric bicycles and cars to minibuses and buses, with prizes for the lowest energy consumption over the 59-mile route.

EVM treated the journey as a much longer test, starting at its base in Crawley on the Friday and driving into London for the start of the rally, completing the rally circuit to Brighton and returning to Crawley covering a total of 140 miles. The manufacturer said afterwards that its e-Cityline had completed the test comfortably, with 38% of its battery charge remaining and an estimated range of a further 70 miles.

“We remain extremely excited by the capabilities of our electric driveline,” said Peter Flynn, Sales and Marketing Director for EVM, “Our continued investment in testing and advancement in the battery management system software is making real world differences to the range of the vehicle.”

To help refine the software further, EVM said that over 120 existing vehicles across Europe are feeding telematics information back into the system to allow the engineering team maximise the functionality of the drivelines. 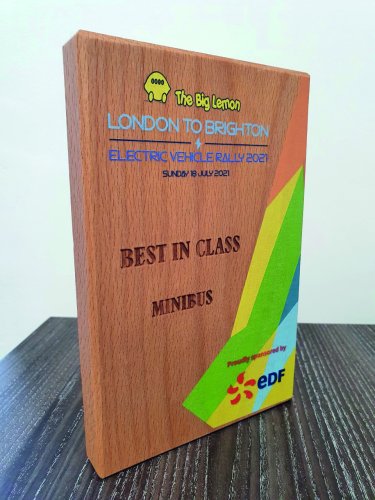