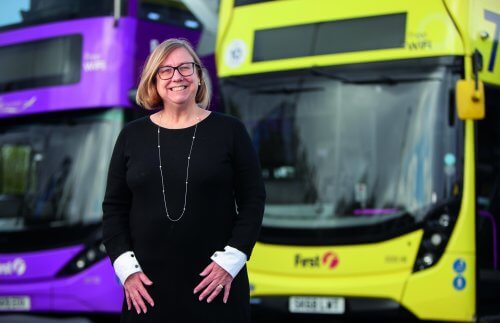 Work has begun on a two-phase project by First Bus and funded in part by Scottish Ultra-Low Emission Bus (SULEB) scheme, which will see over 150 EV charging units installed at its Caledonia depot in Glasgow. The work will transform the depot into the UK’s largest electric vehicle (EV) charging hub.

The operator said the plans mark another major step forward in its sustainable travel agenda and follows a pledge to only invest in low and zero-emission vehicles from December 2022, with an aim to have a 100% zero-emission fleet in place by 2035. With phased completion scheduled across the next 18 months, the redeveloped Caledonia depot, already the UK’s largest bus depot, will have space to charge up to 300 EV buses on site. The first phase of the project is now underway and will see 11 dual DC rapid charging units installed.

Phase one is expected to be complete by September, allowing for the introduction of a further 22 electric buses to Glasgow’s streets ahead of the COP26 United Nations Climate Change conference.
Phase two is scheduled to start later this summer and will see a further 69 dual-headed DC charging units installed over a six month period, increasing the number of chargers on the site to 162. The transformation has been made possible in part due to the award of a further £24.3m following a successful bid in the second round of the SULEB funding scheme.

Janette Bell, Managing Director of First Bus UK said: “First Bus is at the forefront of the green transport revolution, and we continue to fast-track our efforts to surpass passenger expectations. We are proud to be announcing the UK’s largest EV charging infrastructure as part of our transition to a zero-emission fleet. We are making excellent progress on our commitments to reduce air pollution and carbon emissions in our communities. By improving the air quality in the areas we operate within, we are supporting the health of our customers, and by cutting carbon emissions we are putting our weight behind Scotland’s ambitious plans for tackling the global threat of climate change. Launching this project at Caledonia depot, the largest of its kind, is a very exciting next step and reinforces that both First Bus and our stakeholders are making continued investment in the future of bus.”

First says its long-term objective is to ensure that the site is fully prepared for the transition to net zero operations. This includes further opportunities for on-site renewable energy, storage technologies and renewable energy utility supply. 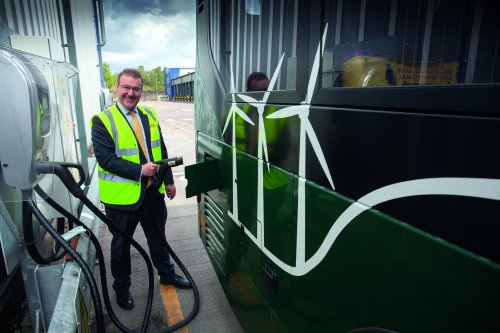 Andrew Jarvis, Portfolio Managing Director responsible for First’s operating companies in the devolved nations, including First Scotland added: “This is an ambitious and exciting plan that will have positive implications for the entire city of Glasgow. We’re thrilled that Transport Scotland understood our vision from the very beginning and that we are starting work on this large-scale project that will help us move closer towards a zero-emission fleet. Over the coming months we will take delivery of 22 BYD ADL EV buses from Alexander Dennis Limited (ADL) in Falkirk, with a further 126 buses delivered and in service over 2021 and 2022, with the order complete by spring 2023.”

First’s power solutions partner for the project, Dutch company Heliox, has previously worked on EV transformation projects at Amsterdam’s Schiphol Airport, Wiesbaden’s Gartenfeldstrasse bus depot in Germany, and the biggest electric bus charging network in Oslo, Norway. The Caledonia project will be the company’s first in the UK, and the largest it has undertaken in terms of the amount of charging points installed.

First is adopting Heliox’s 150kW modular rapid charger, which the manufacturer says is ‘ultra-flexible’ and able to charge any type of electric vehicle, extending its potential use beyond the immediate bus fleet.

Charging will be controlled via smart charging software to ensure that power demand is managed effectively so as not to overwhelm local power infrastructure. Each vehicle will be fully charged with the interior pre-heated for drivers at the start of each shift.

Michael Colijn, Chief Executive Officer at Heliox Group said: “We are marking a big step in zero-emission public transport with the development of the First Bus Caledonia depot. As one of the largest bus operators in the UK, First Bus have chosen Heliox’s market leading rapid, scalable and modular charging system which can handle high demanding bus routes and easily grow with fleets fast charging needs by ensuring power demand is utilised at the most efficient time.

“With Heliox’s experienced team, we are confident working with the most ambitious fleet operators on their path to electrification, streamlining their trajectory to zero-emissions.”
Funding for the project has been made possible by the Scottish Government, with contributions secured by First Glasgow via the first two rounds of the SULEB scheme totalling £28.2m. The operator has committed a further £35.6m to speed up the depot’s transition to an electric fleet, which it says signals its ‘dedication to delivering a trailblazing bus offer in the city.’
The first of the 22 SULEB-funded buses are scheduled to be in service from September this year, ahead of COP26, rising to 148 with the delivery of the remaining buses, plus the two BYD ADL single-deckers already in service. Once all 150 buses are delivered, 45% of Caledonia’s fleet will be electric.