In late April, Keolis started operating the second 100% electric Bus Rapid Transit (e-BRT) line as part of the Chronoplus transport network, linking Tarnos to Bayonne, in the south-west of France. Keolis operates the route on behalf of the Basque Country Public Transport Authority SMPBA (Syndicat des Mobilités Pays Basque Adour). The first e-BRT line, linking Bayonne to Biarritz, started running in September 2019. The new line is 10km long, with 24 stations and seven 100% electric vehicles, which Keolis expects to carry approximately 90,000 passengers per month. This new service will increase the frequency by 25% and has the objective of increasing ridership by 50%. With the introduction of the new buses, around 40% of the journeys on the Chronoplus network will be made on electric vehicles. Launched on 26 April, the second e-BRT line follows the same route as former bus line 2, connecting the centre of Bayonne to the centre of Tarnos in 20 minutes. Five of the 24 stations are connected to the first e-BRT line. The new route serves the main activity hubs in the conurbation, including three secondary schools, the town halls of Bayonne and Tarnos, shopping and leisure centres, cinemas and sports parks, the Basque Coast hospital centre, and railway station. The seven vehicles will run obetween 0600 and 2400hrs at weekends and in summer, at 15 minute intervals during the day. Built by Irizar, the 100% electric articulated buses are 18 metres long with a total capacity of around 150, including 38 seats equipped with USB sockets. The buses use a dual charging system, fast charging carried out at the terminus (taking around five minutes on average) or slow charging at the depot at night, which Keolis says needs three to four hours. Worldwide, Keolis operates over 4,000 vehicles running on alternative energy, which represents about 20% of its total bus fleet. In France, Keolis now operates five BRT lines running exclusively on alternative energy. Besides Bayonne, the company operates a 100% e-BRT service with 43 vehicles in Amiens; in Pau, a hydrogen BRT line, and; in Sophia-Antipolis, a BRT line running exclusively on natural gas. 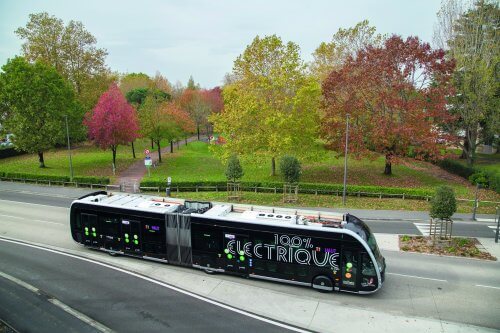