Independent Turkish manufacturer Karsan’s new electric city bus, the e-ATA has made its debut in a number of European cities. The bus is available in lengths of 10, 12 and 18 metres as part of Karsan’s range of vehicles from six to 18 metres. Three 12-metre e-ATAs have been inspected and tested by private and public transport companies in cities in Romania, France and Italy as part of the e-ATA roadshow event which started in October.

The eco-friendly e-ATA was trialled in Romanian cities including Bucharest and Cluj. The tour included Timișoara, where 44 e-ATAs will be delivered, Braşov, which has ordered 12, and Slatina, where 10 e-ATAs will be put into service. The 12-metre e-ATA on demonstration in France will continue its roadshow in Luxembourg and France after a stay in Aigrefeuille-sur-Maine, whilst the e-ATA’s journey in Italy started with the ASSTRA National Conference in Rome.

Karsan’s e-ATA comes with seven different battery packs ranging from 150kWh to 600kWh, with a maximum battery capacity of 300kWh at 10 metres and 450kWh at 12 metres, and up to 600kWh for its 18-metre articulated version. The e-ATA uses wheel-mounted electric hub motors to deliver 250kW of peak power and 22,000 Nm of torque in its 10 and 12 metre versions, or up to 500kW in the articulated version. Karsan says that a range of up to 450 kilometres on a single charge is possible when the vehicle is full, tested on a real bus route and with the air conditioning running in the heat of the summer. 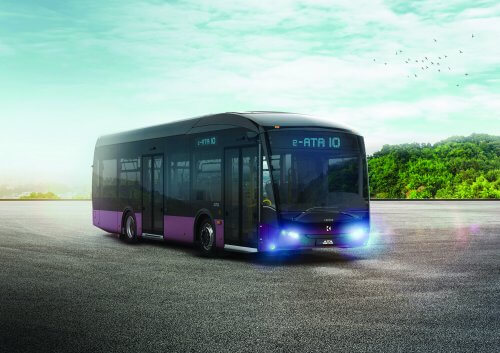