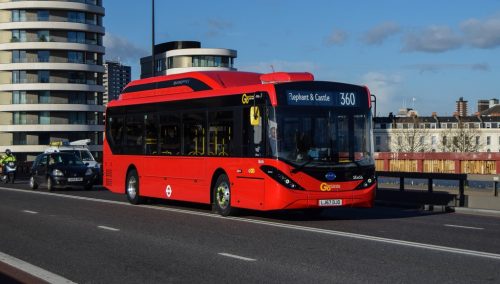 Last week saw the introduction of 10.8m BYD ADL Enviro200 EV single-deckers on the Go-Ahead London-operated route 360 between Royal Albert Hall and Elephant & Castle, making this the latest route to convert to full electric bus operation in London. As reported in CBW at the time, the order for the 14 electric vehicles was made early this year, which represented the first order BYD and ADL won for the new 10.8m model. The new electric buses will run out of Go-Ahead London’s Camberwell garage. SEe56 is seen approaching Vauxhall on November 25 while working on route 360. Kris Lake took the picture.