The controversy began after local operator Rabbie’s Trailburners complained about one of the fleet wearing the plate LC19RAB; soon after, LC19AAA was also noticed as a reference to rival firm AAA Coaches, which uses that registration format (ending AAA) on its vehicles.

The arms length municipally-owned operator is alleged to have also used the plate LC19VOY on one vehicle, referencing the owners of Timberbush Tours, June and Gary Voy.

This, however, was dismissed as ‘entirely inaccurate’ by Jim McFarlane.

Chief Executive of Rabbie’s, Robin Worsnop, wrote to the council to complain about Lothian’s behaviour, which subsequently led to Jim’s apology.
In his response, published by the Edinburgh Evening News, Jim said: “Having now had the opportunity to look into the matter, I do not consider that the purchase and deployment of these particular plates constitutes intimidatory behaviour as you appear to be claiming.

“I do however concede that this may have been provocative towards your own business and that of AAA Coaches.
“I therefore view the purchase and deployment of these plates to have been inappropriate.

Accordingly I apologise fully on behalf of Lothian Buses Ltd and further advise that I have requested that the plates concerned be withdrawn. 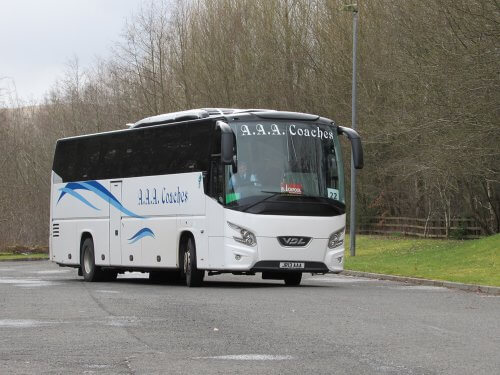 “In taking the decision to re–enter the coach and contract hire market, which we were entirely entitled to do, my expectation was that our business would operate in accordance with our normal high standards of integrity that includes treating our competitors with respect.

“This latter message is one that I will now reinforce to our executive team.”

Conservative Councillor John McLellan added: “For Lothian Buses management it’s a slap-down the size of a 100-seat, triple–axle double decker, but after the company wasted what is effectively public money on such a childish wheeze, Mr McFarlane was left with very little option.

“I don’t think this will be the end of the matter and I’d expect the Lothian Buses board will require a full explanation of the circumstances and an apology from those responsible for bringing the company into disrepute.”

Executive Director of Place in Edinburgh Council, Paul Lawrence, wrote to Rabbie’s Chief Executive after the apology was issued: “I was concerned to see and hear what has taken place and have spoken directly to Richard Hall at Lothian on this matter.

“I know you have now received correspondence from the Chair of Lothian, Jim MacFarlane. I am also aware you find the ‘apology’ received from them far from satisfactory.

“As such, we will formally be making this view clear to Lothian at their next board meeting. I will be asking our board observer to make this crystal clear so that the board hears our view and is asked to ensure such behaviour is put to an end.

“The council does not condone this behaviour and strongly opposes any activity by any operator which could be taken as intimidatory.”