MAN has won a European Transport Prize for Sustainability for the sixth time. The award is intended to encourage companies from the commercial vehicle sector to act sustainably by recognising forward-looking products and strategies. The manufaturer’s OptiView digital mirror replacement system was awarded the trophy in the Assistance Systems category at this year’s ceremony.

Turning or lane change manoeuvres are among the situations in which the Optiview system is said to offer better vision and increased safety over conventional mirrors. The mirror replacement system, which can be specified as an option, uses cameras to show the traffic around the vehicle on large high-resolution displays on the A-pillars and also on the screen of the media system. In addition to the standard view, drivers also have a zoom and wide-angle view at their disposal, providing an optimum view of the surrounding traffic and reducing the risk of overlooking other road users. The system’s field of vision also makes blind spots on the driver’s and passenger’s side visible, contributing to the safety of cyclists and pedestrians especially in busy urban environments.

In addition to the numerous screen views, MAN OptiView offers additional functions including width and length auxiliary lines which can be superimposed on the views of the side displays so that distances and dimensions can be estimated better when overtaking or manoeuvring. In addition, MAN OptiView also integrates the warning displays of the turn-assist and lane change aid functions and the lane change collision avoidance assistant in the two A-pillar displays, putting all important information on the surroundings in view.

An additional function of the system is the monitoring mode, which allows the driver to view the vehicle surroundings when parked via the wide-angle view in the side displays and the front camera image in the media system display. UK coach operators will be able to try out the MAN OptiView system in the Neoplan Tourliner next year. 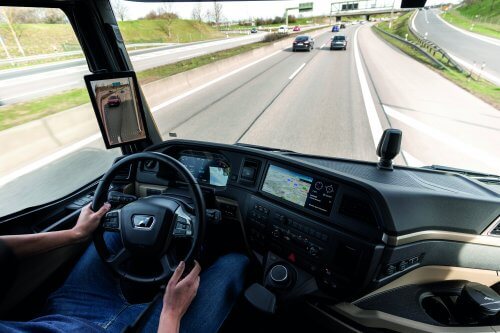