A MAN Lion’s City 12 E has travelled more than 2,500 kilometres through Europe, starting in Munich on April 29, to demonstrate the everyday suitability and reliability of the electric bus. As a symbol for a peaceful Europe, the dark blue bus wore blue and yellow highlights on the front and rear for the journey which covered eight countries in 10 days, racking up more than 2,500 kilometres.

Starting in Munich, the MAN Lion’s City 12 E travelled from the Bavarian capital via Innsbruck, St. Moritz, Vaduz, Zurich, Strasbourg, Luxembourg, Brussels, Rouen, and Cherbourg before catching the overnight ferry to Limerick, where the tour ended on 8 May. The ‘International Bus Euro Test 2022’ is being held in the city from 9 to 12 May, in which MAN will be participating with its all-electric city bus.

“With the tour, we want to show that it is already possible to be emission-free, reliable, and suitable for everyday use throughout Europe,” said Rudi Kuchta, Head of Business Unit Bus at MAN Truck & Bus, adding, “To do this, our team will visit metropolises, undertake cross-country journeys, and even cross an Alpine pass. In this way, our e-bus can demonstrate that it is always sustainable and reliable on the road under a wide range of conditions and that it has more than enough energy even for demanding routes.”

MAN said it also wants to send a signal for a peaceful Europe on the tour, hence the branding with blue and yellow design elements in reference to the colours of the Ukrainian flag. “Buses transport and connect people across borders and nationalities. The design shows that we at MAN stand by the side of people who are in need because of the war in Ukraine,” Rudi made clear. MAN employees have also shown support for that cause; since the outbreak of the war, they have helped those affected in a variety of ways, including the donation of €100,000, collecting relief supplies, organising transport, and offering direct assistance to the refugees. In addition, MAN has provided vehicles to support aid organisations wherever possible.

During the pan-European journey, the team provided updates and reports on MAN’s social media channels as well as, extra background information on e-buses plus photos and videos of the tour.

The Lion’s City E is a zero-emission variant of MAN’s long-standing city bus range. Series production of the 12-metre rigid version started in October 2020 at MAN’s Polish plant in Starachowice, followed by the 18-metre articulated version in April 2021. The buses offer a claimed range of up to 350 kilometres under favourable conditions over the entire service life of the batteries. 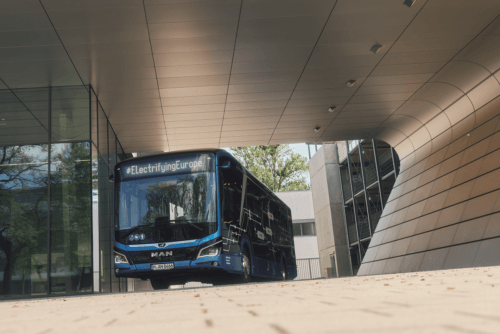