Cambridgeshire & Peterborough Combined Authority has revealed its plans for what it says will be a ‘new, more people-friendly transport service’ to support rural communities across the western part of Huntingdonshire.

Dr Nik Johnson, Mayor of Cambridgeshire and Peterborough, joined councillors and representatives from across west Huntingdonshire at the preview event in the Market Square, St Neots to showcase Ting, the new ‘Uber’ style bus service which is being operated by Stagecoach East.

Ting will go live on 25 October and will provide passengers the option to book in real time by using the Ting-trips app or via its local call centre. Bookings can be made up to seven days in advance, and the service will operate between 0700 and 1900hrs Monday to Friday and 0800 to 1600hrs on a Saturday, with no service on Sundays or bank holiday Mondays.

The Ting branded fleet of four Optare Solo SRs will provide an ‘overlay’ service, and operate in addition to the existing bus services currently running across the area, rather than replace existing services. The six-month trial has been put forward by the Combined Authority as a ‘much-needed public transport option’ which is hoped to get people out of their cars and support its plans to help the region meet the 2050 Net Zero target for carbon emissions as well as make its own operations net zero by 2030.

Speaking ahead of the launch, Dr Nik Johnson, Mayor of Cambridgeshire and Peterborough said: “Using the car is currently the only option for residents in many of our rural communities. They simply don’t have the option of the public transport services which are available to their counter parts in our larger market towns and cities.

“I want to be able to offer the people of Cambridgeshire and Peterborough a world class, connected public transport service, and that work starts here with the introduction of this six-month trial.

“The outcome of this trial will be used to help decide whether demand responsive bus services can become a valuable addition to our public transport service across Cambridgeshire and Peterborough in the future. The way people travel is changing and this trial provides a more carbon friendly, flexible, reliable, affordable and convenient solution for rural communities. I would encourage everyone living in West Huntingdonshire to make use of the Ting service.”

Darren Roe, Managing Director of Stagecoach East, said: “Stagecoach East is excited to be partnering with the Cambridgeshire & Peterborough Combined Authority to launch Ting. Ting will transform how customers use our services and will help to break down the barriers to bus travel that some people experience, by allowing customers to facilitate on-demand, tailor-made bus trips that are not restricted by timetables. Ting will also make bus travel more accessible for more people, by serving the rural communities of West Huntingdonshire. We are excited to launch this new technology and give our passengers more control and freedom when it comes to bus travel.”

Jonathan Djanogly MP for Huntindgon said: “The Government is committed to improving public transport links and encouraging people to increase their use of public transport as part of its commitment to reaching net zero emissions. While decarbonising private vehicles is a key part of the Government’s net-zero strategy, encouraging people to opt for public transport rather than cars in areas such as rural Huntingdonshire will also be vital in helping to achieve this. I welcome that the Government has committed £5 billion of investment in buses, cycling and walking during this parliament and I am therefore delighted that with the trial of the ‘Ting’ scheme in Huntingdonshire the Cambridgeshire & Peterborough Combined Authority is supporting the Government’s aspiration to make buses easier to use, more comfortable and better value for money, in order to encourage more people onto public transport.” 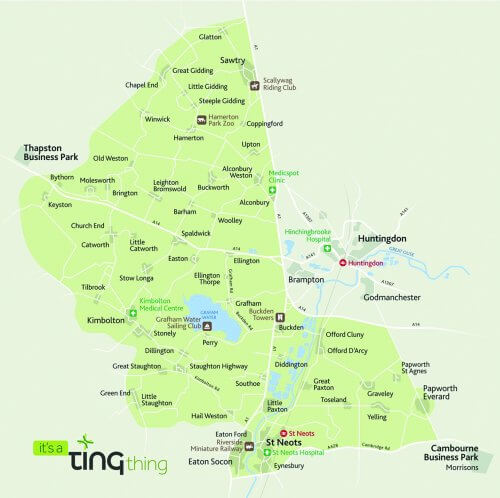