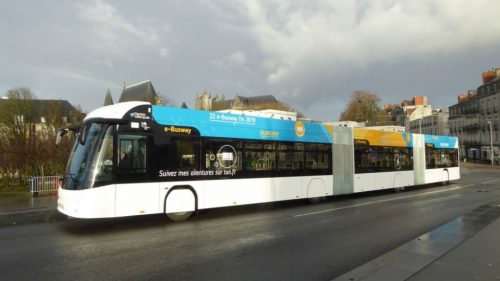 The city of Nantes has introduced the first of its fleet of new electric bi-articulated buses. Based on an existing 7 km right-of-way line, the first bi-articulated electric bus, made by HESS and re-charged with ABB TOSA technology started operating on 20 August 2019, with the remainder of the 22 new electric buses due in service to replace the existing bus fleet by the end of autumn 2019.

Line 4 has been in service since 2006 and connects the city centre of Nantes (Foch Cathédrale) with Porte de Vertou in the south of the city with a high frequency of two to three minutes, similar to the city’s tram network. Since opening, it has been served by 23 natural gas buses. With growing passenger numbers, said to average around 40,000 per day in 2017, line 4 has been a victim of its own success, and the 18m buses are no longer sufficient.

The new vehicles are HESS lighTram 25s, said to be ‘a bus with tram characteristics’ such as its length of 24.38 m. Each vehicle consists of three sections and is capable of transporting 150 passengers of which 40 can be seated and 108 are standees, with space for two wheelchairs. The buses are equipped with ABB drivetrain technology, comprising traction and auxiliary converters, permanent magnet traction motors, roof-mounted battery units and energy transfer systems, and use ABB’s TOSA flash charging system at each terminus and two intermediate points, which ABB says will recharge the batteries in 20 seconds. A full recharge at the terminus is expected to take between one and five minutes.

The interiors feature novel semi-transparent seat backs, whilst each bus will have a different design along its roof, by one of 22 different artists. The overall budget for the changes is €52.9m including the 20 HESS vehicles and a new depot specifically for the e-busway including a charging station, as well as minor infrastructure adaptations to facilitate the operation of the new e-buses. The 23 displaced Mercedes-Benz Citaros will be transferred to the C5 ‘Chronobus’ line which is scheduled to be converted into a busway in spring 2020.