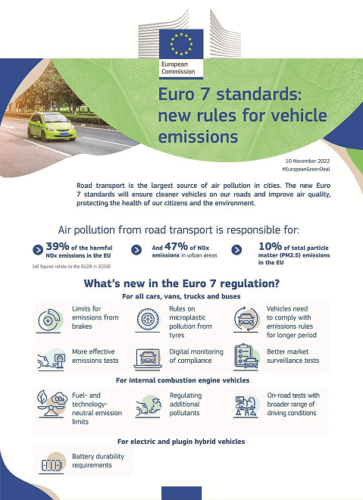 Proposed new Euro 7 emissions rules will encompass electric vehicles, but could prove to be a diversion from zero-emission development, manufacturers warn

The European Commission has presented a proposal which it says will reduce air pollution from new motor vehicles sold in the EU to meet the European Green Deal’s zero-pollution ambition, while keeping vehicles affordable for consumers and promoting Europe’s competitiveness.
The new Euro 7 standards will ensure cleaner vehicles on our roads and improved air quality, addressing the fact that road transport is the current largest polluter in cities. Euro 7 standards and CO2 emission standards for vehicles will work hand-in-hand to deliver air quality improvements, whilst giving the automotive supply chain a clear direction for reducing pollutant emissions, including using digital technologies.

The new Euro 7 standards aim to ensure that cars, vans, lorries and buses are much cleaner, in real driving conditions that better reflect the situation in cities where air pollution problems are largest, and for a much longer period than under current rules. The proposal tackles emissions from tailpipes, and extends that to cover particle emissions from brakes and tyres. It also contributes to achieving the new stricter air quality standards proposed by the Commission on 26 October this year.

While CO2 emission rules will drive the deployment of zero-emission vehicles, it is important to ensure that all vehicles on the roads are much cleaner, the proposal states. In 2035, all cars and vans sold in the EU will have zero CO2 emissions. However, in 2050, more than 20% of cars and vans and more than half of the heavier vehicles in our streets are expected to continue to emit pollutants from the tailpipe. Battery electric vehicles also still cause pollution from brakes and microplastics from tyres, and the proposed Euro 7 rules aim to reduce all of these whilst keeping vehicles affordable to consumers.

The latest proposal replaces and simplifies previously separate emission rules for cars and vans (Euro 6) and lorries and buses (Euro VI); the Euro 7 standards rules bring emission limits for all motor vehicles under a single set of rules. The new rules are fuel- and technology-neutral, placing the same limits regardless of whether the vehicle uses petrol, diesel, electric drive-trains or alternative fuels. They will help to better control emissions of air pollutants from all new vehicles by broadening the range of driving conditions that are covered by the on-road emissions tests, which will have to better reflect the range of conditions that vehicles can experience across Europe, including temperatures of up to 45°C or short trips typical of daily commutes.

They will also update and tighten the limits for pollutant emissions. Limits will be tightened for lorries and buses while the lowest existing limits for cars and vans will now apply regardless of the fuel used by the vehicle. The new rules will also set emission limits for previously unregulated pollutants, such as nitrous oxide emissions from heavy-duty vehicles.

All vehicles will also need to comply with the rules for a longer period than until now. Compliance for cars and vans will be checked until these vehicles reach 200,000 kilometres and 10 years of age, doubling the durability requirements existing under Euro 6/VI rules. Similar increases will take place for buses and lorries.

In support of the deployment of electric vehicles, the new Euro 7 rules will regulate the durability of batteries installed in cars and vans in order to increase consumer confidence in electric vehicles. This will also reduce the need for replacing batteries early in the life of a vehicle, reducing the need for the new raw materials required to produce batteries. Euro 7 rules will also ensure that vehicles are not tampered with and emissions can be controlled by the authorities in an easy way by using sensors inside the vehicle to measure emissions throughout its lifetime.

The Commission’s proposal will be submitted to the European Parliament and the Council in view of its adoption by the co-legislators.

If adopted, in 2035 Euro 7 will lower total NOx emissions from cars and vans by 35% compared to Euro 6, and by 56% compared to Euro VI from buses and lorries. At the same time, particles from the tailpipe will be lowered by 13% from cars and vans, and 39% from buses and lorries, while particles from the brakes of a car will be lowered by 27%.