New York State Governor Kathy Hochul has said that she will propose legislation to shift to 100% electric school buses by 2035 and that by 2027 all new school bus purchases will be zero-emissions.

A document setting out her plan for legislation she intends to propose whilst in office states: “There are roughly 50,000 school buses on streets in New York State, polluting the communities they operate in with harmful emissions. It is estimated that fully electrifying school buses in New York City alone would be the equivalent of taking nearly 650,000 passenger vehicles off the road. To improve air quality for New York State’s children while also working toward our Climate Act goals, Governor Hochul will propose legislation to require that, by 2027, all new school bus purchases will be zero-emissions, and by 2035, all school buses on the road will be zero-emissions.”

The legislation will ensure that the State provides aid towards the cost of installing electric bus infrastructure as well as purchasing or leasing electric buses. It will also enable school districts to seek contracts for buses for longer than the current five-year maximum period to allow greater flexibility to meet the goal.

In response, Electrification Coalition Executive Director Ben Prochazka told local media outlets: “The Electrification Coalition applauds Governor Hochul for this bold but achievable commitment to wean New York’s school buses off oil. This commitment establishes New York as a clear leader in the important work to give students a clean ride to school. Electric school buses are here and ready to be deployed, and it’s exciting to see New York seize the moment. This is a meaningful step toward realizing the national security, public health and economic benefits that electric vehicles offer.”

In October 2020, New York City passed a bill which will require its fleet of approximately 9,500 school buses to be fully electric by 1 September 2035. Besides new purchases, to meet demand and prevent the premature scrapping of diesel vehicles, conversion of fleets to all-electric drivelines is also being investigated. Unique Electric Solutions (UES) is one company which is offering conversions of diesel buses and has been carrying out repowers for Logan Bus Company, one of around 60 school bus companies under contract to New York City. Michael Backman, the company’s Vice President of Sales and Marketing, told School Transportation News: “It’s not only one-third to one half the cost, but the results are exactly the same in terms of air pollution reduction, noise pollution reduction, fuelling costs reduction, feel for students and drivers. If your goal is electrification, it’s just a fact you can’t do it cheaper, faster or easier than repowering your existing buses. If you have budgets for electrification, those dollars will go two to three times further with repower than new buses.” He noted that since demand for electric buses is likely to increase rapidly given the $2.5 billion in incentives now available under new federal infrastructure laws, repowers may become more accessible than new electric buses. 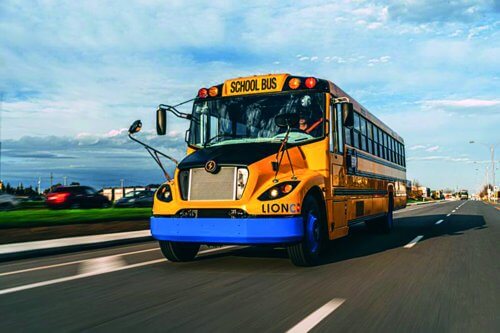