Preston Bus has announced a number of improvements to bus services from 26 July to encourage passengers to get back on bus following the relaxation of Covid-19 restrictions.

The operator has announced it is scrapping its exact fare policy. Preston Bus said it has taken a step back and spoken with customers and front-line colleagues about what is important for getting passengers back to bus, and said that passengers believed the exact fare policy deterred people from travelling.

Preston Bus Managing Director, Bob Dunn, commented: “I am pleased to have acted on this feedback that we have received loud and clear from our customers. We are currently in the process of fitting equipment to buses to allow us to give change, and will shortly be commencing the removal of the cash vaults, which were first introduced when conductors were removed from services. From 26 July our drivers will be ready and willing to issue change whenever required.”

It has also been announced that a new cross-city bus route will be introduced in Preston, the first of its kind for many years. Current routes 16 and 89 will be combined into one cross-city service allowing passengers to travel directly across the city centre without having to change buses. The new route will be numbered 100, in anticipation of the 100th anniversary of the company’s first motor bus services in 2022.

The maximum £2 fare within Preston will also apply to the new service, meaning that travelling from one side of the city to the other will be cheaper as customers on the new route will only have to pay once. Lower fares are also available for shorter journeys, and buses will operate more frequently on Sundays.

Thomas Calderbank, Commercial Manager for Preston Bus commented: “The new Cross City 100 service is an exciting innovation to open up the city through new direct bus routes. Passengers at Farringdon Park will now be able to shop on the docks, or get off the bus on Fishergate, while residents at Larches will have easier access to places such as Gala Bingo and Lidl on New Hall Lane. We will be monitoring the usage closely and making further changes in response to customer demand and feedback.” 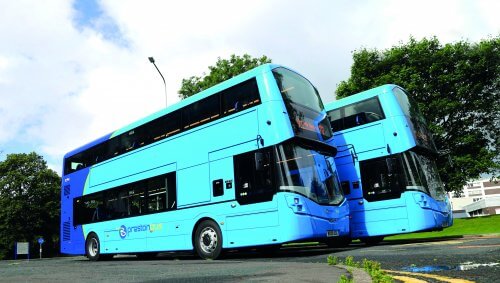