Stagecoach Manchester is celebrating 25 years  of serving Greater Manchester with a specially-liveried bus featuring 30 of its longest serving members of staff to mark the occasion. The newly-liveried bus will be serving routes in south Manchester and features photo collages of some of the operator’s longest serving employees. Every member of staff featured has been with the company for 25 years or more. Driving Instructor Steve Bowe from Wythenshawe, one of the staff members to have his photo featured on the bus, commented: “I’ve worked with some great people and it’s a fantastic It was announced at a recent CPT Live event that coach parking in Blackpool will be free until January 2022, for up to a maximum of 72 hours. Known as the capital of UK coach trips and holidays, Blackpool sees coaches bringing around 120,000 coach visitors per year to the local area, contributing £30 million to the local economy and supporting jobs across the town. The CPT said Stagecoach Manchester celebrates 25 years Free coach parking in Blackpool until end of 2021 team at Stagecoach Manchester. I can honestly say I still look forward to coming to work every day, and helping new and existing drivers with their journey in the industry.” Joining Stagecoach Manchester in 1979, Steve described his initial role with the company as a ‘career stop gap,’ originally intended to last for eight weeks. This evolved into 22 years as a Driver, before a move into his current role as a Driving Instructor. Another member of staff featured on the special livery is Cornel (‘Junior’) Grant, from Old Trafford. With over 38 years’ service at Stagecoach Manchester, Junior joined the company in 1982 and is currently a Driver at Sharston Depot. He has also played a key part in supporting fundraising for Stagecoach Manchester charity partners, including Prevent Breast Cancer, Royal Manchester Children’s Hospital Charity and Forever Manchester. Managing Director Lee Wasnidge said: “We have a proud history in Greater Manchester, and over the last 25 years our staff have helped millions of our customers to get to work, go to school, college and university, get their shopping, enjoy their leisure time, and stay in touch with family and friends. “Anniversaries are a great time to reflect and look back at what’s been achieved and we know we couldn’t have done any of it without our dedicated staff. So, it’s fitting to mark this anniversary by dedicating a bus to the staff who have shown such commitment, provided such great customer service and played an integral role in making Stagecoach Manchester the company it is today. “It’s also important that we keep looking forward. We are proud to be a trusted part of daily life across Greater Manchester and as we start to move out of the current restrictions our services will continue to be central to the future of our economy, protecting our environment and keeping communities connected.” 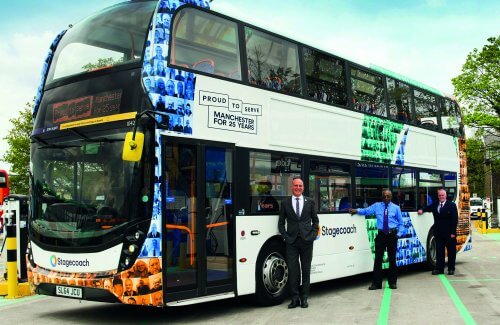