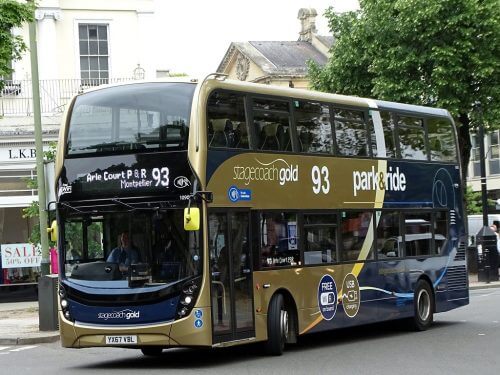 Stagecoach West has seen major expansion in recent years. Managing Director Rupert Cox, who has risen through the ranks of the bus industry, talks to Richard Sharman about the operation

On Friday, 26 November 1993, Stagecoach Holdings acquired Western Travel. This group was formed on 31 October 1986 during a management buyout from the National Bus Company. The initial group of companies at the time of the buyout were Cheltenham & Gloucester, Swindon & District and Red & White.

Midland Red South was then purchased on 10 December 1987, further expanding the Western Travel operating area. The group’s final purchase prior to the Stagecoach takeover in 1993 was Circle-Line of Gloucester, which had amassed a large fleet of Bristol VRTs to operate local services in Gloucester in competition with Cheltenham & Gloucester.

Upon takeover in 1993, Stagecoach split the group up with Midland Red South becoming a separate operating company, leaving Cheltenham & Gloucester, Swindon & District and Red & White to form Stagecoach West & Wales. This was later split again in May 2003 to become Stagecoach West, with Stagecoach South Wales taking the Red & White business.

Managing Director Rupert Cox is no stranger to the business, having been the Commercial Manager from 2003 to 2007 and then returning in 2013 as Acting Operations Director, before taking on his current role from Ian Manning on 1 June 2014. […]