Six Volvo 7900 electric buses fitted with pantograph charging have been launched to serve rural communities in the Kilmarnock area.

Said to be the UK’s first fleet of fully-electric buses serving rural communities, the six new Volvo 7900 single-deckers were unveiled in Ayrshire on Tuesday 27 July by SP Energy Networks in partnership with Stagecoach West Scotland, with the aim of supporting a reduction in Scotland’s overall CO2 emissions, contributing to the country’s Net Zero strategy and improving air quality in the towns and villages served.

Five of the six new battery-electric buses were funded by £2 million from SP Energy Networks’ £20million Green Economy Fund and will operate on a Stagecoach West Scotland route connecting villages along the Irvine Valley with Kilmarnock town centre. Due to the length of the rural route, this project will be the first in Scotland to introduce opportunity charging where buses benefit from rapid and intense charges of power on route, rather than the traditional technique that sees buses charging overnight for hours at a time.

The introduction of Scotland’s first ‘pantograph’ charging point at Kilmarnock bus station will provide on-route charging for the new vehicles. The new buses are expected to save around 680 tonnes of CO2 emissions annually and provide bus passengers with a smoother and quieter experience as well as improving the air quality in Kilmarnock and the rural areas served.

Stagecoach said the launch of its electric fleet will play a big role in Kilmarnock’s green transport infrastructure, with each bus said to be able to travel up to 100 zero-emission miles on a full charge. Using opportunity charging, a full day’s service with a daily distance of up to 270 miles will be covered per vehicle.

SP Energy Networks is part of the Scottish Power group, a principal partner for the United Nations Climate Change Conference (COP26) to be held in Glasgow in three months’ time, and is investing a total of £10billion in the clean energy generation and networks infrastructure needed to help the UK decarbonise and reach net zero emissions.

Willie Coffey, MSP for Kilmarnock and Irvine Valley, who attended the official launch of the new electric fleet at Kilmarnock Football Club, said: “Launching the UK’s first fleet of fully electric buses serving rural communities around Loudoun Valley is a historic moment for East Ayrshire. Providing people with more environmentally-friendly public transport and cleaner air is paramount for Scotland and Kilmarnock is leading the way for a new era of electric bus services.
“This all-electric service will help the country to develop the green transport network of the future and support jobs right here in Scotland alongside supporting Kilmarnock bus users and the environment. The major funding from SP Energy Networks to launch Stagecoach’s electric fleet will significantly speed up the transition to zero-emission buses.”

Frank Mitchell, CEO at SP Energy Networks, said: “As Scotland continues to restart its economy and create jobs, we want to ensure East Ayrshire remains on track to becoming one of Scotland’s cleanest, greenest and most climate-resilient regions.

“Stagecoach’s six electric buses and charging hub are key to delivering electric transport in the region. Using the innovative work taking place in Kilmarnock as a blueprint for the first zero-emissions buses serving rural communities, we can work together to build a healthier and greener Scotland, as well as enhancing public transport experience for local people.At SP Energy Networks, we are ensuring the roll out of electric vehicles and charging happens fairly across urban and rural areas, so that no communities are left behind in the road to Net Zero. Helping communities build their own green economy is at the heart of our Green Economy Fund and as a principal partner for the COP26 global climate change conference we’re proud to be leading the way with this investment.”

Fiona Doherty, Managing Director of Stagecoach West Scotland, said: “This is a great day for the team at Stagecoach West Scotland and we are very proud to have worked in partnership with SP Energy Networks’ Green Economy Fund to secure the investment needed to launch the UK’s first fleet of fully electric buses serving our rural communities in Kilmarnock. Traditionally electric buses have only ever been used on urban routes and this is a fantastic opportunity for Stagecoach and its partners to show that fully electric vehicles can be used across more challenging, non-urban routes. Stagecoach is the UK’s biggest investor in hybrid-electric bus technology, and we have invested more than £1billion in new greener buses over the past decade. Without Stagecoach bus services, there would be an annual increase of 190,000 tonnes of CO2 through passengers using alternative transport. Approximately £343million in potential congestion-related savings are also delivered by Stagecoach through a reduction of 1.22 billion miles of traffic, and the introduction of Kilmarnock’s first fully electric buses will deliver major benefits for the region and our customers. The introduction of the new opportunity charge buses across Kilmarnock further cements our commitment to meet the requirements of the Scottish Government and East Ayrshire Council’s climate change strategies. There is no other comparable project in the UK with other electric vehicle routes either on urban or low mileage rural routes.” 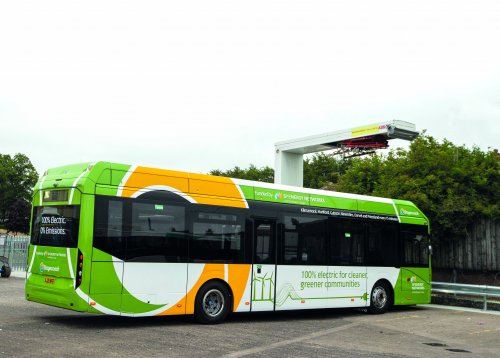