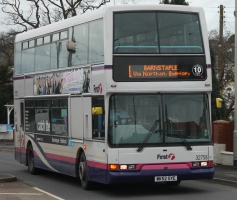 Stagecoach is no longer proceeding with its proposed acquisition of FirstGroup’s North Devon operations following the OFT’s announcement that it is referring the case to the Competition Commission. A spokesman for Stagecoach said the company was disappointed with the OFT‘s decision to refer what he said was a “relatively small transaction to the Competition Commission”.

He added: “We do not believe we can justify spending further money and management time on what has already been a lengthy process.

“As a result, we have reluctantly decided not to proceed with the acquisition and have informed First we are withdrawing.”

Managers at First will now consult with Trade Unions and affected employees to review the implications of the decision.

Giles Fearnley, First’s UK Bus Managing Director, said: “We are extremely disappointed by this decision which may lead to services being withdrawn and puts jobs at risk.

“We are now considering our options and will consult fully with affected employees and stakeholders about the implications of the OFT’s announcement.”

Amelia Fletcher, of the OFT, said: “Mergers between rivals in local markets can result in price rises or a reduction in journeys for passengers.

“As such, we believe it is appropriate the Competition Commission reviews this merger in detail to ensure the interests of passengers in Devon are protected.”

Giles Fearnley added: “We are progressing our plan to reposition and rebalance our UK Bus portfolio to restore operating margins and help facilitate improved growth and returns. We are continuing to develop opportunities for a number of disposals of our bus operations and, despite today’s announcement, we are confident of future successful transactions in the coming months as a number of potential bidders exist in those markets where we have identified other businesses for disposal.”

The acquisition agreement was originally announced on March 12, 2012. The operations, based at Barnstable depot, were to be sold for a gross consideration of £2.8m.

FirstGroup denied the move by Sir Brian Souter’s firm would affect the planned disposal of £100m of assets in its UK bus division, which the firm is selling in order to focus on “high-growth” areas.

However, according to The Scotsman, Karl Burns and Greg Johnson, analysts at Shore Capital, warned the decision by the OFT could have further implications.

“Whilst this isn’t significant in terms of proceeds for FirstGroup – with the company missing out on gross consideration totalling £2.8m – we believe this is a negative signal for the group’s sale of about £100m of UK bus assets,” the pair said.

“Currently, the five largest UK bus operators hold about 70% of the total market and, therefore, we believe operators may be highly restricted in bidding for some of the assets that FirstGroup plans on disposing. We believe this could put the £100m target under pressure.”

The analysts also noted recent press speculation, which “suggested the company may be struggling to achieve its planned disposals proceed target and larger, potentially more-dilutive, disposals could be required in order to achieve the £100m”.

FirstGroup had argued that the collapse of the West Country sale would not affect other planned disposals because circumstances in the north Devon business were unusual as Stagecoach was the only bidder and there is significant overlap between operations of the two companies in the area.

Stagecoach Manchester held a ‘Farewell to the B10M’ event on Saturday (November 14) – when the last two Volvo B10M buses in frontline service were formally withdrawn.

Bio-buses arrive for Stagecoach in Canterbury

Buses to operate on Unibus route, which has seen passenger numbers grow from 290k to 1.25m in six years The first bio-buses in east Kent have entered service in Canterbury. The six ADL Enviro400 double […]