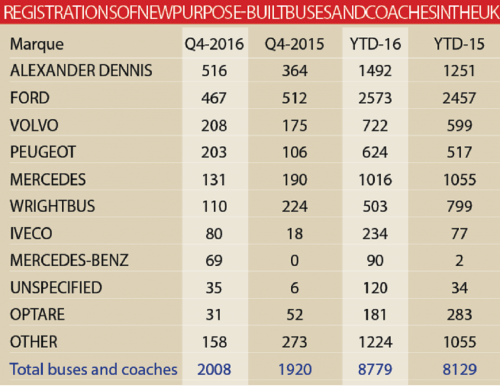 The UK’s new coach, bus and minibus market saw a second consecutive year of growth in 2016 as demand rose by 8%, according to figures published by the Society of Motor Manufacturers and Traders (SMMT).

Minibuses, which account for more than half of the market which the organisation assessed, also made strong gains, with registrations increasing by 9.7% to 4,418, helping to counteract a 6.2% decline in single-decker vehicles.

The largest volume of new vehicles were delivered to the South East (1,538), with 1,488 arriving in London and 1,338 in the South West. Scotland saw 817 new deliveries, while 756 arrived in the West Midlands.

Mike Hawes, SMMT Chief Executive, said: “2016 proved to be another strong year for the British coach and bus market, with many operators investing in their fleets over the past 12 months.

“Getting the latest technology and low emission vehicles on to British roads is essential to help improve air quality in our cities, and 2016’s strong record of fleet renewal will aide that process.”