David Fricker, proprietor of North Somerset Coaches, along with his friends quickly set up the TeddyBusz campaign following a visit to Budapest over the weekend of 26/27 February. He said on the TeddyBusz Facebook page: “Instead of enjoying a weekend break like other visitors, I couldn’t stand by when volunteers were urgently needed so I assisted the Hungarian Reform Charity at Nyugati Railway station meeting train loads of refugees arriving after five or six-hour journeys from the Ukraine border.

“The most upsetting thing was seeing children arrive with nothing more than their school bag. Yet the light on their faces from the few free teddy bears we could give them would melt the coldest heart. Also, the sight of elderly widows carrying just their beloved cat in a basket brought this 40 year old man to tears. I had to come home to resume work but was affected by what I saw, and friends in Hungary with family near the border say they are struggling because Hungary as a small country doesn’t have a well organised ex-pat assocation.

“The mayor of Tiszabecs has been in touch and this will be our destination. Their small town is crammed with children needing urgent help. Trucks are in short supply and are needed for medicines and essential supplies. The biggest thing I can drive is a coach, and our help will be ‘Teddybusz’ – a coach carrying teddy bears, soft toys and possibly some pet supplies to Eastern Hungary.”

Over the preceeding days various supermarket car parks were visited with David’s preserved Ikarus bus to collect donations of soft toys and clothing. Greenslades Coaches of Exeter generously offered for TeddyBusz to use their Volvo 9700 coach for the trip, for which First West Of England kindly offered storage and fuel at its Weston-Super-Mare depot.

The team arrived close to the Ukrainian border on Wednesday 16 March, having departed on Sunday 13 March. 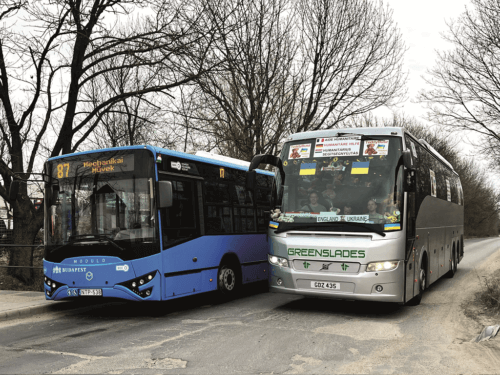