As news of the passing of Her Majesty Queen Elizabeth II broke, the coach and bus industry across the country offered its condolences and sympathies

Operators and individuals from across the country paid their respects following the passing of Her Majesty Queen Elizabeth II. Many were quick to amend their normally bright social media graphics to something more sombre, as well as to post messages of condolence. Others quickly amended electronic destination and information screens, whilst some chose to withdraw Platinum Jubilee buses from service. What follows is a small selection of the voices from across the industry.

Among the major groups, FirstGroup said: “It is with great sadness that we have learned of the death of Her Majesty Queen Elizabeth II. We share the nation’s sorrow and on behalf of the Board and employees of FirstGroup plc, we send our deepest sympathy to the Royal Family.”

Speaking on behalf of Stagecoach Group, Chief Executive Martin Griffiths said: “We are deeply saddened by the news of the death of Her Majesty The Queen. Our thoughts and sympathies are with the Royal Family at this sad time. Throughout her 70-year reign, she has dedicated her life to serving our country and the people within it. She has achieved so much, and she will be greatly missed by all. We have fond memories of welcoming The Queen and The Duke of Edinburgh onto our busway services in Cambridge in 2013, which was a real highlight for our team. As a Royal Warrant Holder for HM The Queen for Bus and Coach services at Stagecoach Bluebird over several decades, our sincere condolences also go to all those in the Royal Household.”

The Go-Ahead Group said: “We join the rest of the United Kingdom in mourning the death of Her Majesty the Queen. On behalf of Go-Ahead’s 27,000 colleagues around the world, we send our deepest sympathies to the Royal Family and pay tribute to the Queen’s extraordinary life of public service.” Arriva shared similar sentiments: “Our colleagues across Arriva Group are deeply saddened to hear about the death of Queen Elizabeth II. Our thoughts and condolences are with the Royal Family at this very sad time.”

Among coach operators, London-based City Circle UK said: “We are saddened to learn of the death of Her Majesty, Queen Elizabeth II. We send our deepest condolences to the Royal Family and stand united with a nation that admired her. Safeway Coaches of Batley said: “We at Safeway Coaches are truly saddened by the death of our Queen. We mourn the loss but take inspiration in how she lived a life of grace and dignity. With this we will continue in our lives.”

Gloucestershire-based Pulham’s Coaches said: “Goodnight and God Bless, Ma’am. It was a pleasure and an honour to be served by you.” Kent’s Chalkwall Coach Hire said it was “incredibly saddened to learn of the passing of Her Majesty Queen Elizabeth II. Our thoughts and prayers are with the family at this time.” Richard Bamber of Anthony’s Travel said: “Saddened to hear of the passing of Queen Elizabeth II. A lifetime of dedicated service to the country and Commonwealth. Rest in peace.”

Welsh operator Edwards Coaches said: “We are deeply saddened by the death of Her Majesty the Queen. We at Edwards Coaches Ltd would like to say a heartfelt thank you for your service to our nation. It is a great loss to our country, Commonwealth and the World.” In Scotland, Maynes Coaches of Bucke said: “It is with great sadness that we have learned of the death of Her Majesty The Queen. Our family and everyone at our company send our deepest sympathies to the Royal Family.” Fellow Scottish operator D&E Coaches posted a simple message: “Such sad news this evening. Rest in peace Ma’am.”

In common with many mourners, MacPhails Coaches of Salsburgh shared an image of a drawing by Eleanor Tomlinson of Paddington Bear with the Queen, a reference to the recent Platinum Jubilee sketch in which the two appeared side by side, accompanied by the message “Respect to a woman who embodied the role of public servant. Rest in Peace.”

Air conditioning specialist Airconco shared a picture of Her Majesty aboard a bus, with the simple message “Rest in peace, Ma’am.” Scania said: “We are deeply saddened by the death of Her Majesty the Queen. She faithfully served the nation as our longest serving monarch. We extend our heartfelt sympathy to the Royal Family.”

Novodata Transport Training reflected on the Queen’s love of driving: “We are sad to learn of the passing of HM The Queen. What an example and an inspiration she has been to our nation. […] She served during the war as an army truck driver, and trained as a mechanic who could service her military vehicle. She remained a keen motorist. Thank you for everything, Your Majesty.”

Transport for London shared a message from London Transport Commissioner Andy Byford and his team which read: “It is with great sorrow that we have learnt of the death of Her Majesty the Queen. We send our deepest sympathy to His Majesty the King and all the members of the Royal Family.”

Mott’s Travel posted an image showing for headshots of Her Majesty at different times during her reign, accompanied by the simple message “Rest in Peace, Your Majesty.”

Among the trade bodies paying their respects, the UK Coach Operators’ Association said: “The UKCOA joins the Nation and the Commonwealth in mourning the death of Her Majesty the Queen. We send our sincere condolences to the Royal Family. The Road Haulage Association added: “On behalf of all the members and staff of the RHA we want to express our feelings at this very difficult time for the Royal Family. The Queen’s reign has been extraordinarily long and during this time generations of workers in the road transport industry have grown to love and respect her for her role as head of state. Her passing marks the end of an era, and we would like to pay collective tribute to her work and extraordinary legacy, as well as offering our sincere and deep condolences to the new King and the whole Royal Family.”

Those above represent just a small selection. Many other tributes and condolences were sent by operators across the nation, showing that regardless of how people might feel about the Monarchy as an institution, the Queen seemed to transcend such feelings. We at Coach & Bus Week join in adding our condolences to the Royal Family at this difficult time. 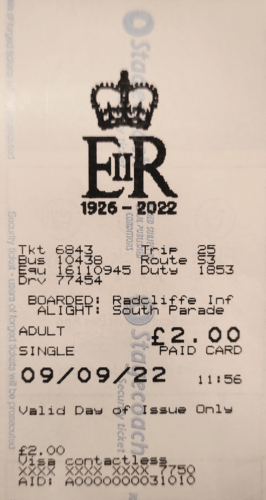