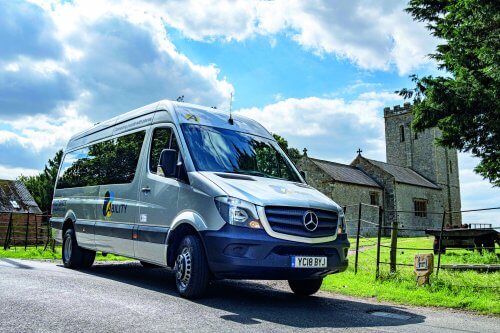 In the three short years it has been operating, Northants community transport operator Ability has touched the lives of many elderly and disabled individuals, giving them new-found independence. Peter Jackson spoke to the company’s co-founder to get the full story

“My background has always been in transport and logistics, predominantly in engineering. I started on the tools before moving into management and holding various roles, from running truck dealerships through to outsourcing and contract work. I’d not done a lot in the bus industry, however,” Nigel Hinch told me. Despite that last fact, he’s now the co-founder and CEO of his own community transport operation, Ability.

He went on to explain how he got involved in the sector: “When I took early retirement due to ill health, I became a trustee of a community transport scheme locally. During my involvement in that organisation, I became aware of a neighbouring area in South Northamptonshire that had no community transport scheme. My wife and I looked into it, researching funding and working out if we could operate something ourselves. At the time, the rural areas were being hard hit by the withdrawal of bus subsidies, as the main commercial operators couldn’t make those routes pay. We thought we could run something that was not-for-profit and reliant – to begin with at least – on volunteers, although we’ve since moved to employed status.