The efforts of NHS staff to provide vital services for the people of Yorkshire and Lancashire are being recognised by Transdev’s literally moving tribute to the county’s NHS teams and key workers.

In Yorkshire, Transdev teamed up with the Yorkshire Post to create a specially-liveried ‘Yorkshire Heroes’ bus to remind everyone of the key role NHS staff and key workers have in our everyday lives as they maintain vital services across the county. The bus carries photos of key workers and NHS staff from the region: Each was nominated by proud friends and relatives, and the organisations they represent, to appear on the sides of the bus.

Transdev’s own teams’ efforts to keep transport links running for key workers and those needing to reach food shops and essential services are also recognised with pictures of some of its drivers, engineering and support staff based at its depots across Yorkshire.

Transdev CEO Alex Hornby said: “As key workers themselves, our teams at York and Malton know how important it is to help others who need to make a journey by bus. Thanks to them, our buses are clean, safe and ready to go.

“There are many unsung heroes who deserve our community’s thanks for their contribution throughout the pandemic, so we’re recognising them by featuring their photos on our ‘Yorkshire Heroes’ bus, along with the jobs they do – including our amazing NHS workers and those who support them.

“In partnership with the Yorkshire Post, we invited nominations to appear on this very special bus, one of a series we’ve created across the North. We’re delighted with the positive response from people who share our desire to recognise those who continue to do so much for us all.”

Among those who appear on the Yorkshire Heroes bus are members of the team from York College – Tony Pollard, Jim McMahon Chloe Black, Gerry Keenan and Ian Dawkes – who together have produced dozens of transparent safety face visors for use in the NHS.

Paul Lawrence, Director of Marketing at York College, added: “When the country went into lockdown York College was instantly proactive in the region, sending supplies to the NHS and mass producing face visors to support those working on the front line. It has been a challenging time for all and, like many organisations, our staff and students have been amazing, working together to help the community.” 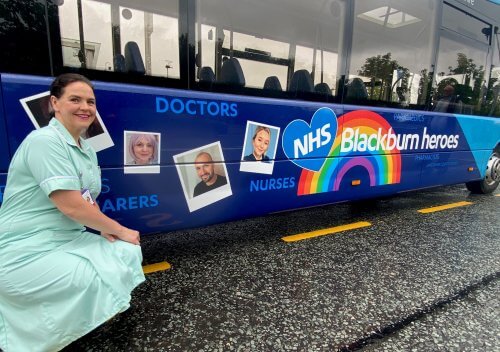 A similar initiative has recognised the efforts of staff in the Blackburn area. The Blackburn Bus Company teamed up with local newspaper the Lancashire Telegraph to create a ‘Blackburn Heroes’ bus, which made a VIP visit to the Royal Blackburn Hospital to give proud NHS staff the first opportunity to see their images on the completed bus.

Speaking about the Blackburn bus, Alex said: “We’ve already had an amazing reaction to our ‘Blackburn Heroes’ bus – and we’ll be creating more Heroes buses across the North, in each of the towns we serve, working with local media partners to create a fitting tribute to the often unsung heroes of our communities.”

Chief Executive of the East Lancashire Hospitals NHS Trust (ELHT), Kevin McGee, continued: “This is a great tribute by The Blackburn Bus Company to the care, compassion and resilience being shown by NHS staff and key workers in our community.

“Our teams in Blackburn and across the region are pulling out all the stops to provide safe, personal and effective care to our patients every day, and I thank each and every one of them.

“The NHS is doing a fantastic job and there’s no way we could do this without the support of key workers in the wider community. I hope the ‘Blackburn Heroes’ bus will make all who see it pause to think for a moment about the vitally important work being done to keep our community going. We’re so grateful for their support.

“I hope that the contribution of NHS staff and all the other carers and key workers will always be remembered, and they’ll continue to be held up as the heroes that they are.”