The automotive industry has called for all stakeholders to match its commitment to deliver zero-emission mobility, as new analysis by the Society of Motor Manufacturers and Traders (SMMT) reveals some £10.8 billion has been dedicated to UK electric vehicle production and gigafactories since 2011, with billions more invested globally to bring new technology to the market. Given the figure accounts purely for public announcements by vehicle and battery manufacturers, and does not include wider supply chain investment, the overall UK automotive commitment to electrification is expected to be significantly higher.

In Britain’s first ‘electric decade’, kicked off by a £420 million investment in Sunderland for the UK’s first mass-produced battery- electric car, more than 10 vehicle manufacturers have invested in communities across the country to create jobs and to design, engineer and build the cleanest, greenest vehicles for domestic and export markets. Alongside cars, the UK also produces electric vans, buses and trucks, as established manufacturers and new entrants have invested in production.

The UK electric vehicle market has grown rapidly. However private motorists accounted for just a third of new plug-in registrations in 2021, with uptake far higher among businesses and fleets, which benefit from generous fiscal incentives. Conversely, purchase incentives have been rolled back dramatically over the past year, with the UK’s EV adoption now falling behind some European markets which offer more attractive incentive packages.

Mike Hawes, SMMT Chief Executive, said: “The UK automotive industry has set out its intent – to meet the challenge of net zero – and has backed that ambition with cash, investing massively during Britain’s first electric decade. As we enter the second, the stakes are higher, with some of the world’s toughest regulation coming, regulation that will seek to determine the pace of change in a market constantly buffeted by headwinds. But mandates on manufacturers alone will not drive the market. Delivering net zero needs a competitive industry and a competitive market. We need a holistic strategy with binding targets on chargepoint provision, attractive fiscal and purchase incentives, and a reliable, accessible and affordable user experience.” 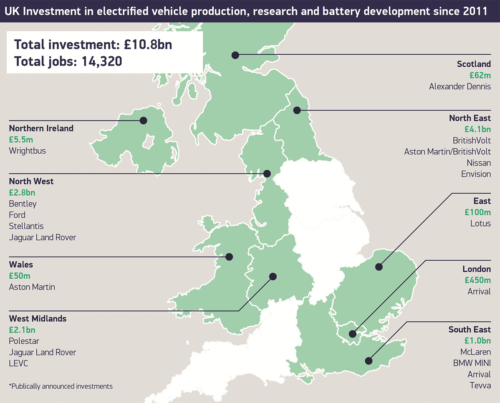