The world’s first hydrogen-powered double-decker buses are to be working in Aberdeen this summer.

First Aberdeen, part of First Group which originated in the city, is to run the 15 buses along one of its most popular service routes and the new vehicles will further underline the city’s role as a pioneer in hydrogen.

The hydrogen double-deckers will be arriving in the city in the spring and will be spotted around the city for several weeks during a period of final testing along with training for drivers.

The new £8.3m project has been funded by Aberdeen City Council, the Scottish Government, and the European Union (FCH JU), with an investment of about £500,000 per vehicle.

The buses are as efficient as electric equivalents, with refuelling taking less than 10 minutes and offering a greater range. Water is the only emission from the vehicles and the new buses continue to contribute to the city’s commitment to tackling air pollution. 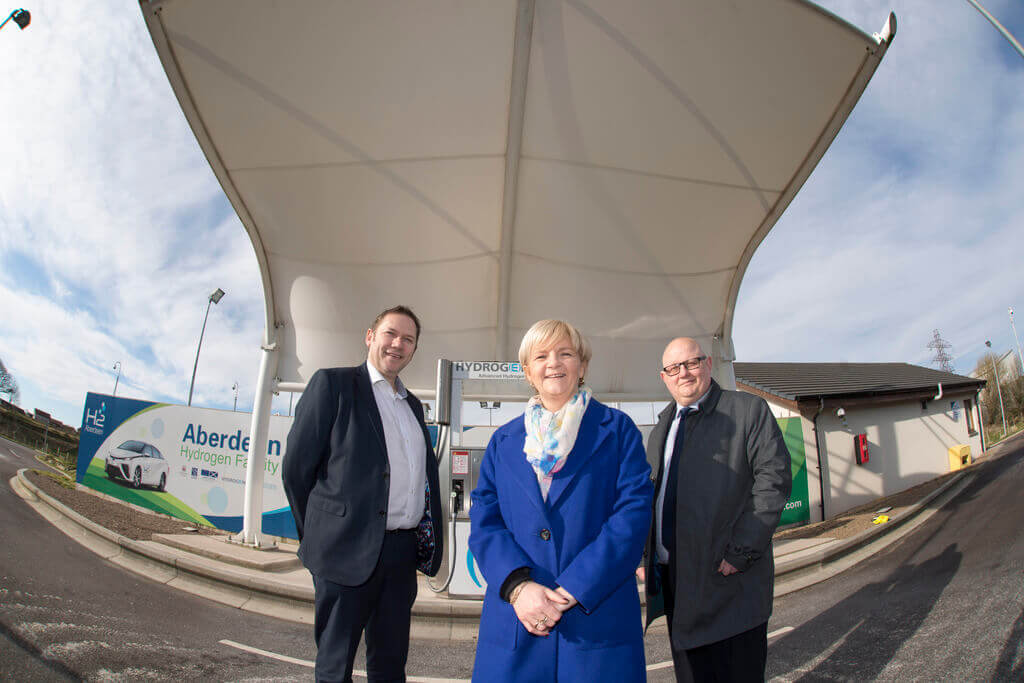 The UK’s first hydrogen production and bus refuelling station was opened in Aberdeen in 2015, as part of a £19m green transport demonstration project. The Aberdeen City Council-led project tested the economic and environmental benefits of hydrogen transport technologies and aims to drive the development of hydrogen technologies.

Aberdeen City Council Co-Leader, Councillor Jenny Laing, said: “Aberdeen is at the forefront of developing green technologies and our continued innovative commitment to hydrogen truly puts us on the global map.

“The new buses come with even better technology helping to tackle air pollution in the city and further makes Aberdeen an entrepreneurial and technological leader by pushing boundaries for hydrogen.

“We are proud to be the world’s first city with hydrogen double-deckers and we look forward to seeing them on the city’s roads.”

David Phillips, Operations Director for First Aberdeen, said: “We are delighted to be working in partnership with Aberdeen City Council to deliver these state-of-the-art and ground-breaking new buses to the people of Aberdeen.

“We are in the process of adapting our depot to accommodate these environmentally friendly zero-emission vehicles and are upskilling all our staff to accommodate this next generation of buses.

“It is a huge effort from all our staff to deliver this project, so we are extremely proud to be a part of this project in helping the city to lead the way on the hydrogen journey.”

The vehicles will be operated by First will be mainly on the Service 19 (Peterculter to Tillydrone) and the Service X27 (City Centre to Aberdeen International Airport via Dyce station) routes and is part-funded by the European Union’s JIVE project, which aims to aid commercialisation of hydrogen buses through joint procurement between cities. Cities that will follow Aberdeen’s footsteps include London and Birmingham, with Dundee and Brighton and Hove being lead partners in JIVE2.

Scotland’s Energy Minister, Paul Wheelhouse, said: “Scotland has some of the most ambitious emission reduction targets in the world so, in the years to come, I expect we will begin to see many more ‘greener and cleaner’ transport solutions like this begin to emerge. I’m proud that today’s announcement, which is a world first, has been made possible thanks in part to Scottish Government funding. We are currently undertaking a wide-ranging project to assess the potential for hydrogen and hydrogen fuel cells for use in transport and heating across Scotland. Hydrogen could well play an important role in the energy transition that’s required in order to meet our 2045 net-zero emissions target.”

The buses have been produced by Wrightbus and will complement the existing fleet that the city already boasts including a range of hydrogen and electric vans and cars through a car share scheme.

John McLeister, Wrightbus Director for Sales and Business Development, said: “This is the start of an exciting chapter for Wrightbus in Aberdeen which will be the first city to introduce this large deployment of fuel cell zero-emission vehicles.

“We are thrilled at this opportunity to partner with First Aberdeen and Aberdeen City Council to deliver a green well to wheel zero-emission solution which will also showcase the world’s first fuel cell electric double-decker bus operation.”