An autonomous vehicle trial has begun, which brings the vehicles onto public roads for the first time.

Aurrigo, which manufactures autonomous first- and last-mile vehicles and autonomous airport baggage transporters has launched a trial of its Auto-Shuttles in Cambridge, making it the first in the country to undertake testing of a custom-made autonomous vehicle capable of carrying passengers on a main road surrounded by other traffic.
With seating for 10 people, the three Auto-Shuttle vehicles will take passengers from the Madingley Road Park & Ride site to and around the University of Cambridge’s West Campus. The trial is part of an Innovate UK and Centre for Connected and Autonomous Vehicles (CCAV)-backed project, led by Aurrigo with Greater Cambridge Partnership (GCP) and Smart Cambridge all working together to explore how autonomous technology could be used on the public transport network.

Passengers recruited for the project will be able to use an Aurrigo app that will allow them to be picked-up at a number of locations along the two-mile route.
“This is another major milestone in the journey towards making autonomous vehicles a reality on our roads,” explained David Keene, Chief Executive Officer of Aurrigo.  “We’ve completed successful trials in city centres, in retirement complexes and at major golf tournaments, but this is the first time these vehicles will be sharing the route with everyday traffic.
“The shuttles, which have been designed and manufactured at our Advanced Engineering Centre in Coventry, will operate the 20-minute journey around the West Cambridge route. They will run autonomously for the majority of the route using our in-house developed Auto-Stack driving software and the latest LIDAR and camera technology to identify potential hazards as they move around.

“Our technology will help provide new transport solutions for city centres, shopping and care facilities, airports and heritage sites. The trial in Cambridge is the next step in
proving it.”

The first Aurrigo autonomous vehicle arrived in the city at the end of October, but the project was delayed by the coronavirus pandemic. With a claimed range of over 120 miles, the Auto-Shuttle is a conventionally-driven electric and autonomous purpose-built vehicle, with a lightweight composite frame powered by a 22kW electric motor. The vehicle also includes an automatically deployed wheelchair ramp. With mapping now complete and the project once again underway, Minister for the Future of Transport Rachel Maclean was able to mark the start of public testing by taking the first official journey.

“Self-driving vehicles present a number of opportunities for the UK, from providing safer, greener and more reliable transport services to creating tens of thousands of well-paid and skilled jobs across the nation,” commented Rachel. “This project is hugely exciting and is an example of how self-driving vehicles could make it easier for people to travel on the UK’s future public transport network.”

The trials, led by Greater Cambridge Partnership (GCP) and Smart Cambridge will support research into potential driverless shuttle services to link the city’s other research campuses with the rail stations and Park & Ride sites and explore how smart technology can be used to cut congestion and improve public transport.

Claire Ruskin, Director of Cambridge Network and business representative on the GCP Executive Board, added her support: “It is very exciting to see these vehicles working on real roads here as another first in Cambridge. These shuttles could be used on demand all day and night, every day of the year – which is unaffordable with our existing public transport. They are flexible and make good use of resources without needing significant infrastructure. As employment around Cambridge is 24/7 for many organisations – including our hospitals, emergency services, and many of our labs – we have been anticipating this new technology to see how real operation will help people get around.

“This trial is part of wider plans by the Greater Cambridge Partnership to help the area work sustainably as it continues to deliver world-leading innovation for the UK.”
A GCP spokesperson said: “Autonomous vehicles are an exciting technology that could offer people a safe and reliable way to travel to the city centre and employment sites late at night or out of regular service hours in the future. These trials are part of the GCP’s ambitions to transform public transport and active travel across Greater Cambridge.”

Dr Richard Fairchild, Operations Director at Aurrigo, added: “We’re really excited to be bringing our autonomous vehicles to Cambridge and can’t wait to get started after the Covid-19 delays. This trial will showcase the power of the partnership of UK engineering companies and government support through Innovate UK to deliver world class products and services to both create a driverless transport option to benefit residents and secure the UK position on the world stage in autonomous technology.” 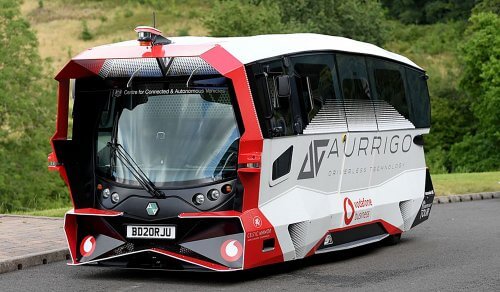