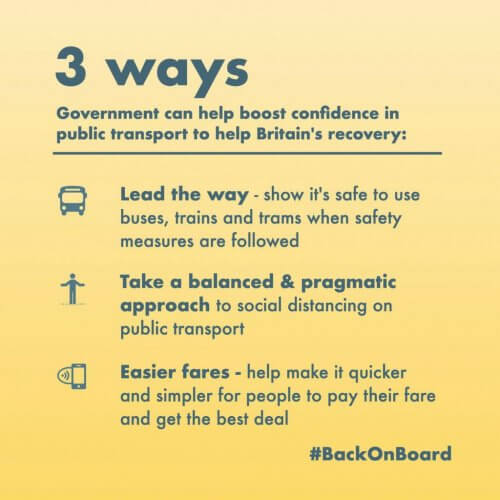 A coalition of organisations representing shops, offices, restaurants, venues, public transport providers and trade unions has written to the Prime Minister, Boris Johnson, urging him to encourage people back on to buses and trains as restrictions are lifted. A failure to get people back onto public transport risks towns and cities where people are more reliant on buses, trams and trains being left behind, they say.

The letter, which has been coordinated by sustainable transport charity Campaign for Better Transport, has been endorsed by leading business, leisure and hospitality organisations including the British Chambers of Commerce (BCC), the British Retail Consortium (BRC), UK Hospitality and the CBI, as well as the umbrella organisations representing the rail and bus industries (the Rail Delivery Group and the Confederation of Passenger Transport). Other organisations including the Trades Union Congress (TUC), the British Beer and Pub Association (BBPA) and the British Independent Retailers Association (BIRA) have also added their names, as well as the Urban Transport Group, which represents the local transport authorities for the largest urban areas. Taken together, these organisations represent hundreds of thousands of businesses employing millions of people and which, pre-pandemic, helped people to make over 15 million daily journeys.

The letter calls on the Government to aid a full revival of the retail, leisure and hospitality businesses that form the beating heart of town and city centres across the country by helping to restore people’s confidence in using public transport.

Paul Tuohy, Chief Executive of Campaign for Better Transport, said: “As England prepares to take the next step out of lockdown, it is vital that the Government sends a loud and clear message that travelling by public transport is both safe and desirable. Without this we risk slowing down the high street recovery as many people will simply stay away, or worse seeing towns and cities more reliant on public transport being left behind while car-heavy areas experience increased pollution and congestion.”

In order to prevent a lasting legacy of shuttered businesses, economic inequality, increased congestion and more pollution, the letter urges the Prime Minister to:

The full letter can be read at bettertransport.org.uk/sites/default/files/research-files/letter-to-prime-minister-may-21.pdf