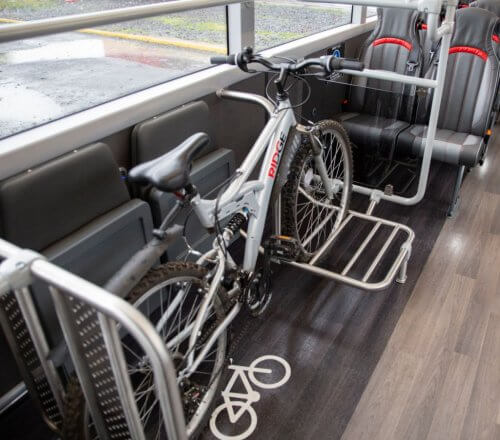 The West Coast Motors Group- owned Border Buses, which operates a network of local services across Scottish Borders, The Lothians, Edinburgh, Northumberland and Cumbria, has introduced a £3.25m fleet of 10 new Enviro200 single decks that have been custom built by Alexander Dennis Limited (ADL).

The bike buses, as they are now referred to by passengers, have been introduced following a pilot scheme undertaken on the busy Peebles to Edinburgh route earlier this year. Its aim was to determine the demand for a greener transport solution focused on reducing car journeys, traffic congestion and encouraging active travel.

The pilot scheme was so successful that Borders Buses has moved quickly to introduce the 10 new, hi-spec Enviro200s on three key routes, the X95 Carlisle to Edinburgh via Hawick and Galashiels, the X62 Galashiels to Edinburgh via Peebles and the 253 Berwick to Edinburgh service via Dunbar and Haddington.

In addition, a further 10 Enviro200s will be introduced by the end of February, all forming part of the multi-million drive by Borders Buses to establish Scotland’s first wide-spread network of bike friendly bus routes.

Colin Craig, Managing Director of West Coast Motors, said: “The areas we cover include some of the most popular destinations in the UK for cyclists and our trials on the X62 Galashiels-Peebles-Edinburgh route have proved conclusively that pedal power and horsepower do work together.”