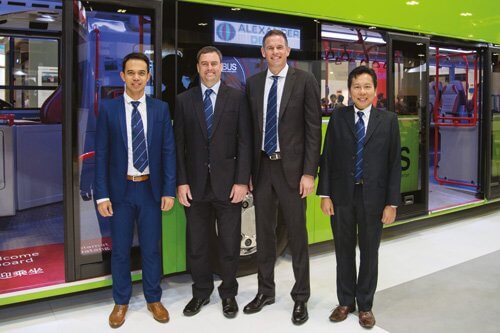 The concept bus, commissioned by the Land Transport Authority (LTA), is the result of close collaboration between the transport agency and ADL, the world’s largest double-deck bus manufacturer. Exhibited at a series of Bus Carnivals at venues across Singapore in March and April 2016, visitors were encouraged to provide their feedback on the design of this brand new vehicle designed specifically for Singapore.

Positive feedback on the design and specification has also been received from international visitors to the SITCE event.

The most significant differences compared to most Enviro500s are the third door and second staircase. The second and third doors act as the exit points for all riders, the result being an efficient, two-stream passenger flow throughout the vehicle which speeds up boarding and alighting, reduces vehicle dwell time at bus stops and enhances the passenger experience.

Ease of access for all passengers is possible because of the absence of any internal steps in the lower saloon.

Paul Davies, Director and General Manager of Alexander Dennis Asia Pacific, commented: “As a global business, we embrace this type of major customer involvement initiative. The LTA challenged ADL to design and build a double-deck bus with three doors and two staircases which they believe will transform the passenger experience. A series of engineering workshops with the LTA, in addition to passenger feedback, has enabled us to further refine the initial design into a viable technical solution. We are confident the vehicle will deliver the operational advantages the LTA require while improving the passengers’ on board experience.”

When asked about the complexity of engineering the vehicle, Bill Thong, General Manager of Alexander Dennis (Singapore) Service Pte Limited, said: “It’s not a question of difficulty. It is a question of desire. If the market is calling for a three-door bus solution then the challenge is for manufacturers to respond and that is what we at ADL are doing.”

Paul Davies added: “Our collaboration with the LTA to develop this concept bus underlines our commitment to this critically important market. With over 200 Enviro500 vehicles in circulation here, we already have a strong foundation in Singapore. In summer 2015, we invested in a new, centrally based, local HQ in Tagore 8, which is headed up by Bill Thong. We are delighted Bill joined us, bringing over 15 years senior management experience in commercially focused roles having been with Michelin, Alcoa, Akzo Nobel and ComfortDelGro before joining ADL.

“Since then we have continued to strengthen our organisation in Singapore, recruiting a new Service Manager and Field Service Engineers. ADL is renowned for delivering reliable vehicles underpinned by class-leading aftermarket support, so having our own highly trained Service Engineers gives our customers the comfort of knowing their vehicles’ uptime will be maximised.”