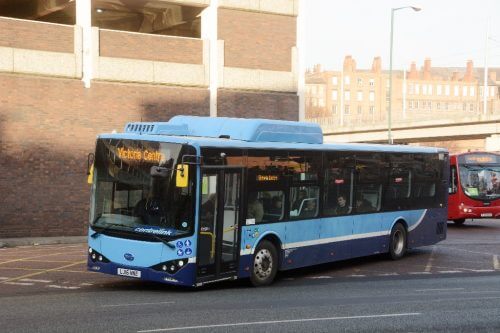 Two sites will use a £3.2m fleet of 13 vehicles, which will be operated by Nottingham Community Transport and based at Queens Drive, the site of one of the Park & Rides which the organisation already operates from

The 13 new fully electric single-decker BYD eBus vehicles add to the 45 electrics already in service and combine to make one of the largest electric bus fleets in Europe. They will be operated by Nottingham Community Transport.
The service from Queens Drive, previously Citylink1, has been rebranded Centrelink – extending and continuing the previous cross-city service under that name – while the service from Nottingham Racecourse, previously Citylink2, has been branded Ecolink, which will run along the UK’s first Eco Expressway giving priority to electric vehicles.

The City Council will shortly be consulting on plans to introduce a Clean Air Zone over the next three years, taking in over one hundred bus stops and two bus stations across the city centre. This will aim to set a minimum entry standard with ultra-low emission standards for certain sensitive areas with high pedestrian use by 2020.

Ian Combellack, General Manager of Nottingham Community Transport, said: “We’re really looking forward to operating the new Centrelink and Ecolink Park and Ride services from the end of January, and as the largest operator of electric buses in Europe, we’re also excited about working with Nottingham City Council and BYD on the final stages of the electric bus project, including the introduction of the new Eco Expressway.

“The new Centrelink service will also provide a valuable new link to Victoria Bus Station from Queen’s Drive Park and Ride, which we hope will be attractive to both existing and new customers.”

Frank Thorpe, BYD’s UK Country Manager, added: “Winning this order from Nottingham, which has one of the largest fleets of electric buses in the UK, is of huge significance to BYD.

“Nottingham City Council selected our eBuses after a comprehensive evaluation programme involving a variety of competitors demonstrating the strength of our proven technology.

“It’s no surprise that other major UK provincial cities – such as Liverpool – are already following Nottingham’s lead.”

Councillor Nick McDonald, Portfolio Holder for Business, Growth and Transport at Nottingham City Council, said: “These new buses are a welcome addition to our Linkbus services, which ensure that local residents are provided with emission-free public transport to access local amenities and neighbourhoods and vital medical, education and work links as well as improving air quality.

“One of the key objectives of this project was to drive down running costs so that subsidised services like Linkbus can be retained at times of severe budget restraints, which we have so far achieved.”