Hulleys of Baslow celebrated its centenary in late April. Jonathan Welch paid a visit to see how the company has evolved over the years

In 1914, Henry Hulley began a taxi business in Baslow, although the first bus didn’t arrive until 1921 when he acquired a Model T Ford with solid tyres. It entered service on 29 April that year, initially operating on a service from Baslow to Chesterfield via Cutthorpe. In September 1922 most journeys were re-routed via Wadshelf and Old Brampton and extended back to Bakewell on the route still operated today as the 170. As the fleet grew, a house and garage were built on Calver Road, Baslow in early 1922, and by around 1925 the route was further extended beyond Bakewell to Middleton-by-Youlgrave, laying the foundations for an operation which would survive through the generations to become an operator which today runs services across the picturesque Peak District and reaches the major industrial cities of Sheffield and Manchester.

To find out more about the company’s long history, we spoke to current owner Alf Crofts about its current operations, and long-serving driver and transport historian Dennis Vickers who has researched the Derbyshire firm’s earlier days.

“Henry Hulleys’ nephew Stanley Eades was operating a service from Chesterfield to Eyam and agreed to transfer his licence to his uncle from 17 December 1930, and Hulleys extended the route to run between Chesterfield and Tideswell via Eyam,” explained Dennis.

By 1934 the fleet had grown to seven buses, most bought new, and regular summer excursions were added to popular tourist destinations. Henry Hulley & Sons Ltd was formed on 25 January 1938, and in 1939 the company acquired the routes and two buses from Maurice Kenyon of Grindleford, providing links from local villages to Grindleford railway station.

“The war effort saw three buses requisitioned in late 1939,” Dennis continued, “but Hulleys managed to acquire a few replacements during the course of the conflict, some of which were in such poor condition that they had to be re-bodied.”

In June 1946 the company took over the services of Sellers and Kent, Ilam, but in 1954 sold the work to Warrington’s of Ilam. One-man-operation began on some journeys in 1952 to reduce the costs of employing a conductor, and around the same time buses gained a new livery of red with a duck egg grey roof, plus maroon band and wheel arches. Excursions were very popular in the 1950s and the fleet expanded, but the increasing popularity of the motor car was to reduce the amount of coaching work.

“Henry Hulley died on 20 June 1955 and in his memory, his children bought a new Bedford coach which the firm operated for 20 years,” continued Dennis. 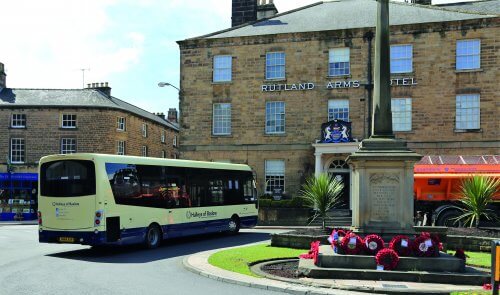 ”With falling passenger numbers, the original route from Baslow to Chesterfield via Cutthorpe ended on 25 July 1970, and most journeys to Grindleford Station were abandoned. However two new routes linking Bakewell with Over Haddon and Monsal Head, were added in 1971, replacing ones withdrawn by North Western.
“With the raising of the school leaving age in 1973, the fleet expanded again and by 1976 just three of Henry’s children, Jack, Ben and Nina, were left running the company. Nearing retirement age, they decided to sell. There was interest from Chesterfield Corporation, but it pulled out of a deal at the last minute and Hulleys was bought by J. H. Woolliscroft & Son, who ran it as ‘Silver Service’ from Darley Dale from 7 August 1978.”