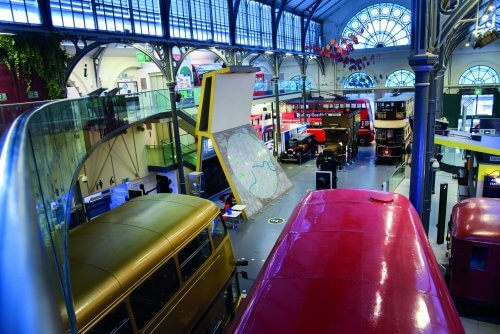 A brand new exhibition, half an Optare Solo SR, and a museum shop with a huge selection for any London Transport enthusiast are just some of the attractions that await your visit, as Richard Sharman found out on his recent visit to Covent Garden

London Transport Museum (LTM) is something of an icon in the bus industry, and even if you are not an avid bus enthusiast it still holds much interest for those who want to see how things were done in the Capital many years ago. LTM is located in the famous Covent Garden in a building that used to be a vegetable, fruit and flower market. This month marks 42 years since the museum first opened in March 1980, although it did close for a major refurbishment between 2005 and 2007. Entry to the museum is via the Covent Garden Piazza, which adjoins the museum’s shop that people are also able to visit without having to go around the museum itself.

Sam Mullins OBE is the Director of LTM and joined the museum in 1994. Under his leadership it has become one of the world’s leading museums of urban transport and a much-loved visitor attraction. It is popular with people interested in art and design as well as with transport enthusiasts, families, and those with an interest in the history of London. Annual visitor numbers to the museum have grown from 180,000 to 400,000 under his stewardship, but some people might be surprised to know about the ownership of LTM.

“London Transport Museum is a subsidiary company of Transport for London, but as we are a charity we are obliged to be at arms length from TfL and not controlled by them,” explained Sam. “I have my own board with an independent chairman, and three members of TfL and nine independents but we work really closely with TfL as it is important to reflect what’s going on in transport now.

“In recent years we have positioned the museum to be more about the influence of the past on the present, and how the things we do now are going to shape the future. Readers will know that the past has shaped things like bus routes over time, but if you just talked about the mythical golden age when everything was Routemaster and it was never going to change, then contemporary interest would go. We do a lot of thought leadership events here that involve the bus companies and manufacturers, consultancy firms and engineering suppliers, and that is very much talking about decarbonisation in the next 10 years and nibbling away at this big ‘elephant in the room’ issue.

“We find the museum acts as a neutral space for our interchange programme, which is about thought leadership and a forum for TfL and its suppliers to discuss the future. We like to think that we can do for TfL what it can’t do for itself. People ask why a transport operator is running a museum, and the simple answer is that it isn’t. They leave it to a well equipped heritage charity to do it. We have more corporate members at the the museum in the UK, and that is mainly due to the connection to TfL.
“In the bus industry everyone likes to know each other’s business, staff move around from one company to the other. Companies are working in consortiums and then that changes and they are working against them. So the forum is a great way of operators and suppliers taking part and knowing what is going on.”
[…]

Subscribe for just £10 a month with our annual print and digital offer, Or login if you are already a subscriber