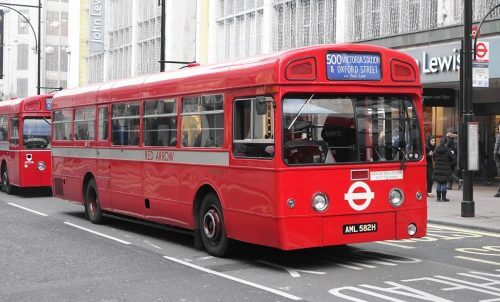 Half a century of the first London Transport Red Arrow services starting in the centre of the capital was marked on Thursday December 14, 2017 by the London Transport Museum’s preserved Red Arrow AEC Merlin and The London Bus Company’s Merlin and National Greenway. The latter two vehicles operated in service on route 507 between Victoria and Waterloo while the museum’s vehicle carried invited guests. What became a network of high capacity single-decker routes had started with the 500 on April 18, 1966. The 507 was introduced on September 7, 1968. DAVID BELL