Showbus held its final bus rally at Donington Park on Sunday, next year will see a new location. Richard Sharman attended the rally to see which vehicles stood out in a list of some 300

From 1993 to 2012 the rally was held at the Imperial War Museum in Duxford, then moved to Long Marston airfield near Stratford-upon-Avon in 2013 due to a clash of events.

It was intended to return to Duxford in 2014, but unfortunately the museum had decided that the rally had run its course at the Imperial War Museum site.

In 2015 it looked like a move back to its original home of Woburn Abbey, but unfortunately rain a few days before caused vehicle parking issues with mud.

Showbus decided that a hard standing area for 2015 would be a good move, Donington Park in the East Midlands seemed ideal as it was central and had good motorways links.

For the next three years this was to be its new home, but the 2018 event last Sunday was to be the last.

The day dawned cold and grey, and unfortunately remained that way at a steady 12°C, only a few very short spells of drizzle first thing in the morning effected the large number of photographers gathered by the entrance to the site. Vehicles flowed into the site from 0830hrs until 1130hrs.

Whilst I was stood taking photographs for this feature I was speaking to an enthusiast who had travelled all the way from Hong Kong just for the rally, which shows that Showbus still is a truly international event that attracts visitors and often vehicles from many different countries around the world.

The pictures from this event showcase the diverse vehicle types that attended.

Looking to the future

Showbus has received many requests from enthusiasts and operators to return further South, with the cost of hiring Donington very high a decision was made to head for a new venue in 2019.

On the 29 September Hertfordshire County Showground will be the location of the rally, where it hopes that a family atmosphere will return as a promotion with Whipsnade Zoo will see a reduced entry fee and a frequent shuttle bus between the two sites. 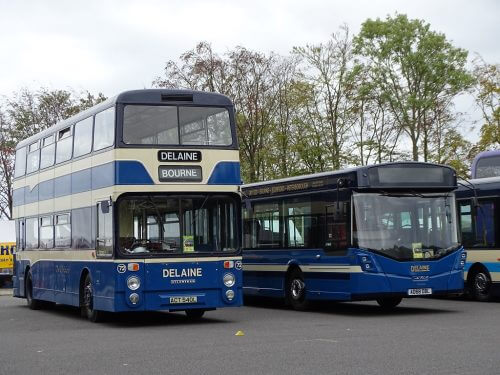