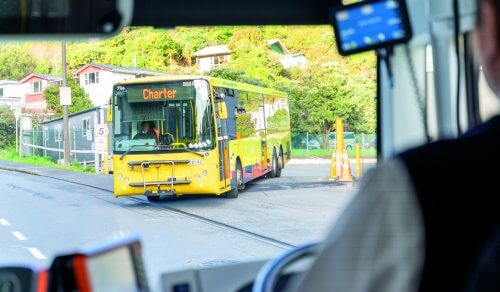 In efforts to reduce its carbon footprint, Transdev, operator of Howick and Eastern Buses in Auckland and Mana Newlands Coach Services in Wellington, has committed to trial a new hydrogen fuel technology in its existing diesel bus fleet. Greg Pollock, Chief Officer and Managing Director of Transdev New Zealand, said trials would soon commence using the new HYDI Hydrogen fuel system which has been designed to fit a standard diesel bus, and works by adding hydrogen gas to a diesel engine. “A HYDI Hydrogen unit will soon be fitted to buses in our Wellington fleet, with the goal of testing to determine what level of reduced fuel consumption and ensuing emissions we can achieve in Wellington conditions,” Greg said. “Globally, transport accounts for more than 24% of total CO2 emissions yearly, which is why we are exploring more electric and hydrogen fuel technologies to reduce our environmental impact and meet New Zealand Government’s emissions reduction targets.”

The technology being deployed has been developed by South Australian company HYDI Hydrogen. Managing Director of HYDI, John Wilson, said independent testing of the hydrogen on demand system at the University of South Australia had shown an 80% reduction in carbon emissions when fitted to a diesel engine. The technology uses electrolysis to split hydrogen and oxygen molecules from water using an electrical input provided from the engine’s battery, plus a small amount of distilled water.

Hydrogen is only produced ‘on demand’ while the motor is running and introduced into the air intake of the engine, meaning that there is no hydrogen stored on board or under pressure. “Analysis of the exhaust gas of a bus fitted with the HYDI Hydrogen system showed significant reductions in greenhouse gases, including carbon,” John said. “While there is much attention on future fleet technologies, there is usually substantial investment and long lead times required in delivering new fleet, remembering that heavy vehicles, such as buses, have a life cycle of 20 years or more.”

Greg concurred, saying the need for action was immediate: “Transdev continues to work proactively with governments and partners to build more sustainable future fleets. At the same time we are also taking steps to make immediate reductions to vehicle emissions in our fleet.”

Transdev plans to trial the HYDI Hydrogen system in its bus operations locally in Wellington before assessing the suitability for other sites.